We woke up in Prague. Our hotel, the Hilton Atrium, was outside the main tourist areas of Prague with nothing nearby. An immense hotel, it is a zoo with all the tour groups here – most of which also happen to be Viking tours. Today we’re scheduled for a city tour, and I was imagining something like the bus tour of Paris. Given the number of sick people in the group, a simple bus tour might be an appropriate way for us to get an orientation for the city and its sights. 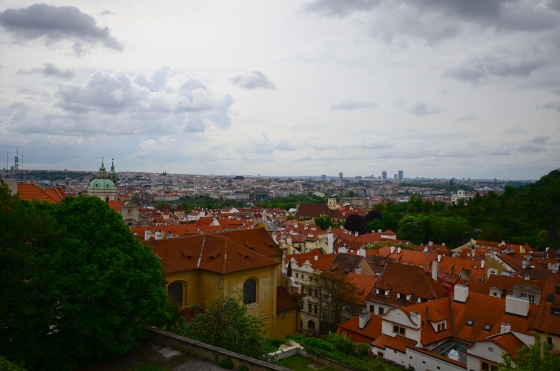 View of the city from Prague Castle 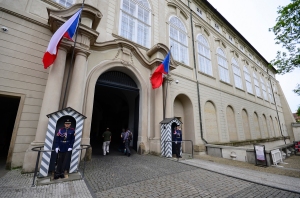 However, this time our bus took us to the castle district, where we got off the bus and toured on foot with our local guide; we returned to the bus to be taken to the Mala Strana, where once again we left the bus and had a nice long walking tour (we, and 100,000 others) of the Mala Strana (the Lesser Quarter), the Charles Bridge and the Stare Mesto (the Old City).

Our guide was very good. She got off to a rough start with us, taking umbrage at one of the men thinking she was calling the “deer moat” of the castle a “beer moat” because of poor English pronunciation. Someone quickly explained the joke to her, which she found very funny and couldn’t wait to tell her fellow guides, and then she relaxed and things went much better. She never became very relaxed about answering questions out of sequence, but then again, we did have a group member or two who like to pelt the guides with questions mercilessly. 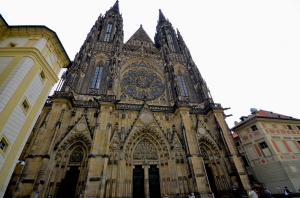 I cannot take you along our tour step by step, so suffice it to say we saw all the highlights. Everywhere we went we were part of huge crowds, and at the John Lennon Wall I took a picture of an Asian tourist in front of it – since that was how we saw everything. Most of the time we could not really get close to anything, and having to always keep one hand on the our “waluables” was also distracting. The commentary was very good and we learned a lot, and our guide also gave us some insight into life in post-communist Czech Republic, a lesson in learning to live with change – something the people of this country have endured in spades. 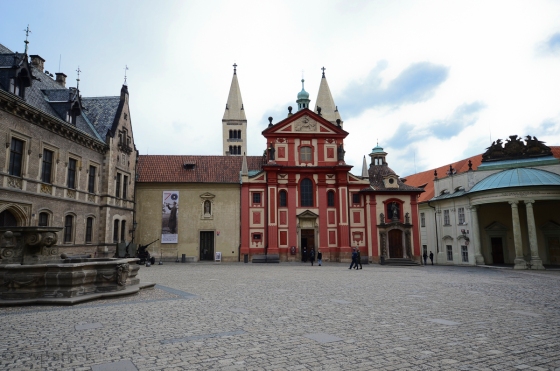 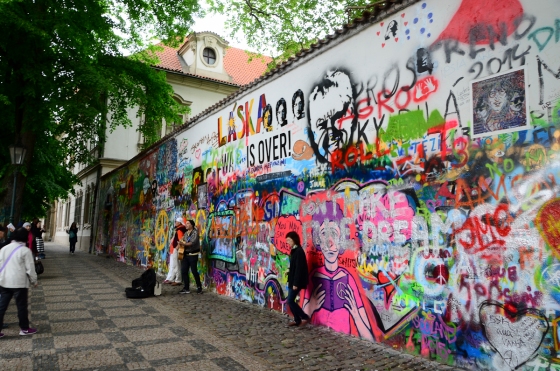 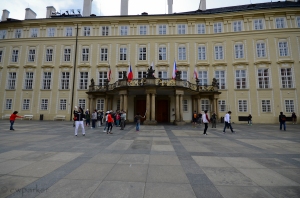 We did end up in the Old Town Square about 10:55, just in time to see the astronomical clock spring open its windows at eleven and watch the saints wave to the crowds amassed below. Once through that ritual, we left the square and walked up Paris Street (very apt name!) to find our bus and return to the hotel. The plan was to regroup, eat and rest and then head out again in the late afternoon.

We did not go out again.

While I have you as a captive audience (you’ll have to keep reading to find the link to the next day), I would like to say something about the John Lennon Wall.  What you are seeing is not the original painting of the wall.  According to the guide, the wall came into being when she was a teenager (imagine about late 70s early 80s).  She talked about how John Lennon’s music was like a “call for hope” for the Czech young people – a fantasy for them of someday knowing something other than being under the thumb of the Soviet Union.  On the wall, people would leave messages of hope for peace, using Lennon’s lyrics and their own poetry.  It remained a symbol for them even after the Soviets relinquished their control.  However, about 2-3 years ago someone had the bright idea to start it over, and had the wall painted white.  What you’re seeing here is a new version of the wall.  Our guide talked about how bittersweet the experience of showing this to us was:  She talked of being happy that the sentiments that began the wall prevail, but sad to have lost that piece of her own history.  As an aside, she also encouraged us to add our own comments and messages to the wall, but I didn’t see anyone actually do that.  I would have loved to go back and see this “con calma,” to read more about it and to study the messages.

Another of the things that we saw on our walking tour that I would like to talk more about was the astronomical clock.  Sunday, the day I took these pictures the place was so crowded with people waiting to see the clock work.  Just note that on Monday, there were fewer people, both here to see the clock and on the Charles Bridge, and on Tuesday, even fewer!  Moral of the story:  Try to visit Prague mid-week!

Here are various pictures of the clock – it was really quite amazingly detailed. 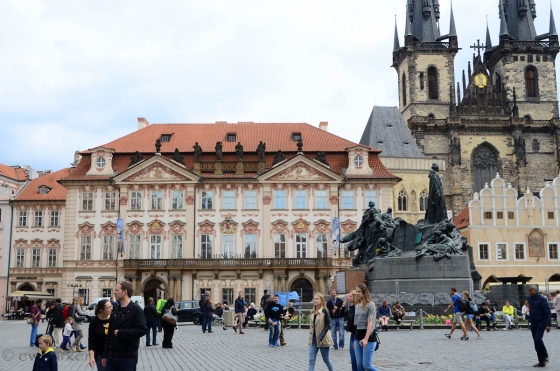 Main Square in Prague – Jan Hus monument is that huge statue in the picture. 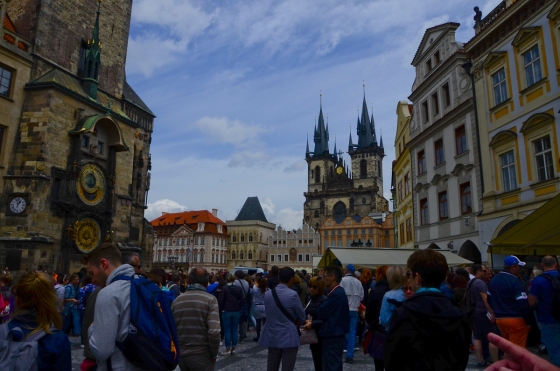 One shot in which I did not try to crop out the millions of tourists with whom we shared the city on a Sunday morning in May. (See the clock again?  These were just some of the people waiting to see it work!)

I have more Prague pictures for you!  We spent two more days wandering the city, so keep reading here.