Our road trip (Miami, FL to Milton, WI)  underway, our first stop was in Sarasota to visit the circus museum, but the Ringling is much more.  Depending on your interests, plan enough time for your visit.

The biggest attraction would be the art museum judging by the advertising and the website, but we did not visit it.  Given that we’re road tripping we were stopping to see specific things only.  That means we have to pick and choose, and has no bearing on the tourist-worthiness of the attractions we do not see!

As I implied, the attraction of greatest interest to our party (mom, dad, 23 year old son) was the History of the Circus Museum, but the Ringling campus includes that, the art museum, the Howard Tibbals Learning Center, the Ca d’ Zan, and the gardens.  My guess is that you need about 5 hours to see everything.  Fortunately, there are several eating options right on the premises.

The Tibbals model is huge!

We started our visit at the Tibbals Learning Center.  The building houses Howard Tibbals’ life’s work, an enormous model of the Ringling Brothers Circus, called the Howard Brothers’ Circus because the Ringlings did not give him permission to use their name and logo.

The scale model that Tibbals  has spent his life building is phenomenal.  It is the largest miniature circus model ever built.  There are hundreds of railroad cars, animals, thousands of figures,  and dozens of tents.  It accurately represents the more than 1,200 people involved in creating a traveling circus, and that doesn’t count the 15, 000 possible spectators.  From the advance men who bring in the marketing, the first trains that convey all the support services and their tents (the kitchen tents are literally the first ones erected), through the last train to load the just finished performers and take them to the next stop, the circus was a massive undertaking, every activity carefully planned and coordinated to provide, literally,  “the greatest show on Earth.”

I think we all have an idea of what a circus is, and maybe we have even seen one in our lives.  Born in the 1950s, the heyday of the circus was past, so my first hand experiences have all been either very small or Cirque du Soleil.  Thank goodness the appeal of the circus carries on.  What a shame it would be to lose the tradition and the artistry.  Within the museums at Ringling, there are hints that a renaissance in interest about the circus and its performances may be beginning, witness the trapeze schools that are springing up.

Detail from the Tibbals model, showing the Menagerie

The experience with the Ringling Circus Museums begins with a documentary about the circus – basically an overview of the 24 hours the circus spends in a given town.   Wow!  Again, what an undertaking!  The trains start rolling into town in the middle of the night and begin to erect the circus while the town is still asleep.  First, the kitchen tents…About 1,000 people arrive with those first trains, and by dawn they will need to be fed breakfast.  They will have already put up tents, unloaded the horses, unloaded all the animals, etc,. before breakfast.

In addition to the show horses, the circus travelled with hundreds of draft horses.  The horses not only pulled all the wagons in the circus parades, but they were harnessed to raise the tent poles and unload the trains, too.  For the horses, there had to be stable tents, feeding areas, food, a blacksmith.  All of this travelled with the circus!  Now, just think through all the support needed for the other animals (big cats, elephants, dogs) and the performers themselves and you get the idea of the size of this “city with no ZIP code”.

As stressed in the documentary, the circus was big entertainment! The townspeople enjoyed the activity under the main tent for sure, but the unloading of the circus and the setting up were just as much a spectacle, especially for the kids, who probably got out of school that day.  The Midway, with the side shows and the games, was erected first to entertain the spectators while the performance tents were erected and the performers prepared.  From the Midway, spectators moved through the menagerie, where they could see all the exotic animals travelling with the circus, and soon to perform.  Finally, they begin to fill the main tent.

A detail of the Tibbals model showing the “back Door” the performers’ entrance.

During the tour, I was regaling my son with the expressions that grew out of the circus.  The meaning of  “a three ring circus” is evident when you look through the Tibbals model into the main tent and try to grasp all that is going on.  And three rings became old hat before the Ringling Circus peaked.  In addition to the three rings, there were additional platforms or stages set up between the rings and a track around the entire space was useful for parades of animals, performers and clowns.  And we think kids today get too much stimulation! A “Dog and Pony Show” was one of the original forms of this type of entertainment, that eventually were subsumed into the larger circus.

The circus performers of old were celebrities to rival ours of today.  Glossy photos, posters , magazine articles – they were household names.

Interesting to me, once the performance in the main tent began, the crews were already breaking down all the support services, loading them back onto the trains, and heading to the next town.  Everything was timed like clockwork.

I would have liked to see more of the history of the Ringling family, because the Ringlings were a Wisconsin family.  Their circus had its roots in Baraboo, WI and the personalities of the 7 brothers had to have played a large part in the development of the circus that came to define the word.  I am planning a trip to Baraboo to round out the experience:  There is a museum there called “Circus World” that also deals with the Ringling Brothers Circus. 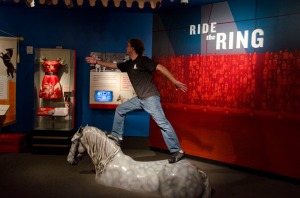 Our next stop on the tour was the part of the museum that houses the railroad cars, and here the most interesting is the “Wisconsin”, the car where John and Mabel Ringling traveled with the circus.  It is pretty cool, but you can only see it by looking in through the windows.  Bedrooms, bathroom, kitchen, dining room and parlor, as well as the quarters for the sole employee who manned the car as valet, cook, and steward are all arranged down the length of a luxurious custom rail car.

Just a note here about this more serious part of the museum:  it is evident that there is restoration work going on, as well as research.  It is here that you can fill out a form to request information about particular individuals who might have been part of the circus.  This we did – and was actually a focus of our visit.  Oscar (the son who is traveling with us) was looking for more information about “Little Joe,”  A Red Arrow Camp legend said to have been an aerialist with The Ringling Brothers.  He’ll fill out the paper and submit it, and let’s see what we find out!  Check back with me for the result of that!

The mansion seen on the approach

Once through the circus parts of the Ringling estate, we headed to the Ca d’ Zan, or “House of John”, John and Mabel Ringling’s mansion in Sarasota, right on the same campus, next to the water.  Its Venetian style and over-the-top decoration feel out of place in modern Florida, but for its time, basically the Roaring Twenties, it was just right.  It was a stretch for me to realize how wealthy the Ringlings were…Believe it or not, the circus was a cash cow, a highly profitable enterprise.  John Ringling had the foresight and the friends to invest  and diversify, so that his sole source of income did not depend upon the circus.  Later generations of his family were more adept at spending and it may have been their inability to pay the taxes on the mansion that enabled the city of Sarasota to take over the estate.  (The Tibbals Learning Center and Circus Museum would have been added to the grounds subsequently).

We visited just a small portion of the gardens, which are open to the public free of charge – and that visit was to Mabel Ringling’s rose garden.  Unfortunately, by this time we were rushing things a bit because we were behind schedule on our road trip (having lost a full half day on the first day, trying to return a Comcast cable box!).

By all means, plan to visit the “Ringling.”  We really enjoyed the parts we saw, and I hear that the art museum has some major works.  The Ringlings were avid collectors, both for their house as well as posterity. It would be interesting to see what they collected – for the artistic aspect as well as for any clue it might provide into who these people really were.  That is the one thing I left the museum without.

To read the next installment of this road trip, click here.

The Ringlings’ mansion from the sea side