Trieste, Italy – Not quite 24 Hours

[This blog post was part of a trip to Slovenia and Croatia, in May 2016.  I have separated it from the longer narrative so that I can list it under Italy. (The original page covered both Trieste and the first part of the trip to Slovenia. ]

The view of the Trieste waterfront from our hotel window

These first two days were our travel days.  We flew on American from Chicago to Philadelphia and then Philadelphia to Venice. It was easy and hassle free, just the way travel should be!  We arrived in Venice about 9:00 am, and though the airport is under a massive renovation, there were no hold ups once off the plane, but there we were with four hours to kill until we could retrieve our car. Somehow the time passed.  In my sleep deprived stupor, I did walk around and try to get the lay of the land for when we return to Venice at the end of the trip.  I figured out where the water taxis and busses come in, and determined that the water bus was probably the best option for us (being too stingy to spend 110 euros to take a water taxi!) We lingered over coffee and food, really drawing that out as long as we possible could.  Finally, we made contact with our friends and with our car; we eventually rendezvoused, got in the car and began the drive to Trieste. 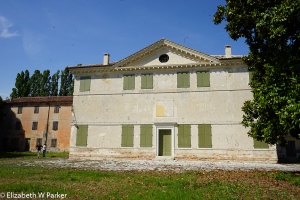 “Villa Zeno” in Cessalta, Italia.   Look for the classical proportions.  Unfortunately we could not see the triple loggia which was on the opposite side.

We made one detour along the way to find a building called “Villa Zeno” an Andrea Palladio design from the 16th century.  Supposedly under restoration, we found it looking pretty abandoned.  We were also unable to get around it to the side of the notable triple loggia.

Onward we went until we arrived in Trieste. We were booked for one night only at the Hotel Savoia Excelsior Palace. We availed ourselves of a welcome bottle of sparkling wine from the region, toasted the beginning of the trip and headed to our rooms to freshen up and rest.  We had an early dinner in the hotel’s restaurant, the Savoy, one of the highest rated restaurants in the city and one with a partnership with Eataly. Our food was very good, but perhaps we were just too tired to fully appreciate how good.  We did have an excellent bottle of wine.  It was a Terrano – a local standout that we had been advised to try. [Our attempts to drink another bottle along the rest of the trip found us frustrated as we were constantly asked for the vintner, which we had not thought to note!  I am not sure what that means in terms of the quality of that wine overall – maybe it is highly dependent on the maker?] 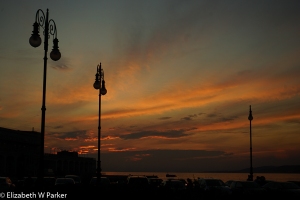 We took a walk after dinner just get a look around and to take some night photos – Piazza Unita d’Italia, the opera house, a wide canal, side streets filled with café tables and evening revelers.  We were in bed by 10:30 and thankfully slept through the night.

It all began with a beautiful early morning view of the sunlit port of Trieste from our hotel windows. We had coffee on our balcony as the city was waking up, as traffic was building up along the street below.  Yet, beyond, the water was like glass, an occasional colorful kayak, slowly sliced the still flatness. Haze hid the distant shore creating a sense of other-worldliness out on the water. It was an exquisite contrast to mull over a cup of coffee.

By the time we got outside to walk, which was just minutes after 8, there was a steady bustle of a morning already underway, less traffic now that everyone seemed to have arrived at work.  We retraced our steps of the evening before, winding out way to the Piazza Unita d’Italia.  Impressive by day, it still did not match the magnificence of the piazza in its evening finery of lights and music. 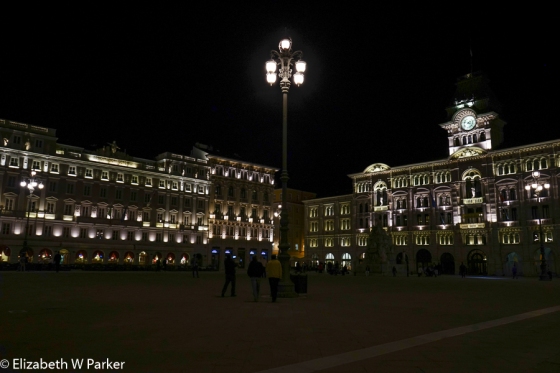 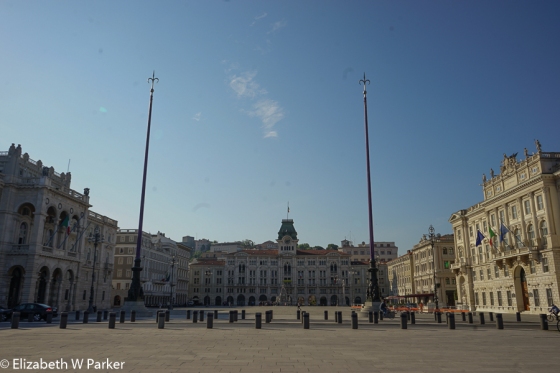 I again made note of the Grand Hotel Duchi d’Aosta was attractive for its location (right at the corner of the huge piazza), and Harry’s Grill looked like an excellent breakfast option, and it is rated one of the very best dinner options, too.  Harry’s Grill is one of the restaurants of the hotel, and I would certainly be found there sipping my first espresso or cappuccino of the day! 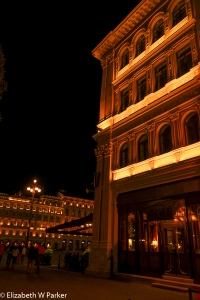 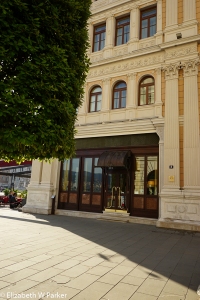 We walked back toward the water and discovered a bronze statue grouping of a bersagliere and two women.  I tried to research the statues, and all I could find was that the bersaglieri were the first troops, after the unification of Italy into a single country, to reach Trieste.  That makes sense as the statue seems to be walking up the steps from the water, to the Piazza of – the unification of Italy! The figures of the two women are seamstresses (le sartine) sewing the three striped flag of the new country. 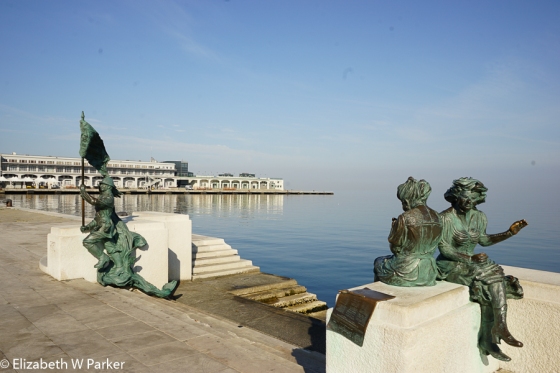 From there we walked along the waterfront back towards the hotel and breakfast in the dining room. (To continue the trip journal, click here.)

Now let’s consider Trieste as a destination.  During the four years I lived in Italy, and in all the times I have visited since, I had never come to Trieste.  After this brief taste I feel as if I would come again and stay for a few days.  Trieste makes an excellent location from which to explore the sights we saw (the Lipica Stud Farm and the Skocjan caves) but also those we did not:  The wine region around Gorizia, the Postojna Caves, the Predjama Castle, Piran and the beaches to the south along the Adriatic. Trieste itself is worth exploring, too! Just our short night walk after dinner, revealed a fun night vibe in the cafes that spilled out into the streets! There are even Roman ruins.  We missed a lot.  It is worthy of a longer stay.