An almost 360 degree look at the plaza before the parade.

I apologize in advance because I am writing this post over a month after the experience.  I guess I was so traumatized by it, that only now can I sit down and try to describe it to you … No. Not really.  It did take me awhile to process though.

What am I talking about?  Back on December 28th, the spousal unit, youngest descendent (so far) and I set out for the town of Hatillo to see the famed Fiesta de las Máscaras.  I read up about the history beforehand and found that though there are similarities to a festival in the Canary Islands, the Hatillo festival is not considered to be the same celebration. The founders of Hatillo did indeed come from the Canary Islands.  If you would like to read about how the two festivals are dissimilar, click here. The supposed basis for the festival is the bible story of Herod sending out the Roman soldiers to slay all the boys under two years old.  The paraders are supposed to represent the Roman soldiers.  (See if you can find any of that in the coming pictures!) 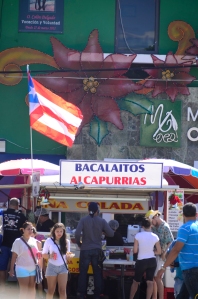 I was interested in going because 1) I have lived here for almost 30 years and have never been, and 2) through Isla, we used to sell  a hat made for these costumes that was an amazing piece of work.  Plus with my son home and a beautiful day, an outing seemed like the ticket!

The drive to Hatillo is fairly uneventful, though getting out of San Juan and into the country is always so calming!  Trading in all the cement and litter for blue skies and lush, green foliage is a balm for the soul.  But, as you approach Hatillo on the main highway, the road makes a sort of right hand turn and takes you toward the beach and downward so that you are rewarded with one of the most unforgettable views of the ocean in all of Puerto Rico.

Even as we drew near the town and began looking for the central plaza, we could already see the preparations for the parade.  We asked for directions to a place to park and were directed to an impromptu parking lot between the plaza and the beach.  What a good location!  Very strategic!

We arrived just before lunch, but did not have much luck finding a restaurant, so we went straight to the plaza, where we discovered all kind of nutritious (not!) fried foods like my personal favorite, bacalaitos (cod fish fritters shaped like pancakes).  There were also alcapurrias, and pinchos (shish-kabobs) and lots of beer.  Refreshed we meandered around the plaza, looking at the artisans’ wares and watching the crowd. 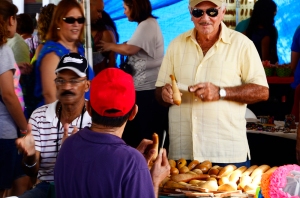 While the music was playing on the bandstand, this gentleman was testing the wares of the guiro maker. Even his friend was in the swing of things, clapping in time to the music.

Waves carving the rocks off the coast of Hatillo.

When it became obvious that not much was going to happen until 3:00 pm (Puerto Rican time!) we decided to go down and take a look at the beach.  Hatillo is just a bit further along the coast to the west from Arecibo (about which I posted earlier this week).  As a result the beach and shore are similarly endowed with rocks and waves.  It is quite picturesque.  The crazy bashing of the waves and the feathery plumes of spray are mesmerizing, particularly if you have a camera and are trying to catch just the perfect moment when the plume is highest in the air!  I will only show you one of those pictures.  (I had quite a number to choose from!) 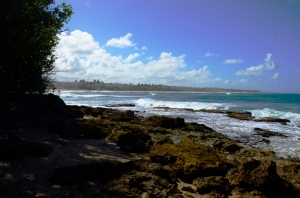 The day was quite hot, so when we ventured back up to the plaza, we stuck to the shade.  In addition to the artisans’ kiosks there was entertainment in the plaza, too.  Everyone could join in, but most, like us, kept to the shade to watch.  We got to see a bomba presentation and listen to a pretty good band while we awaited the arrival of the parade. 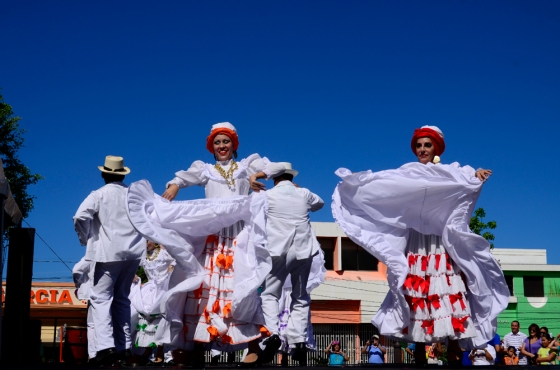 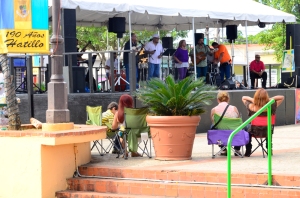 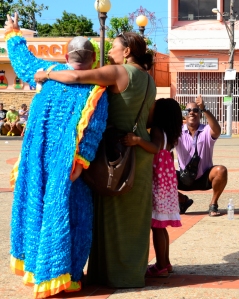 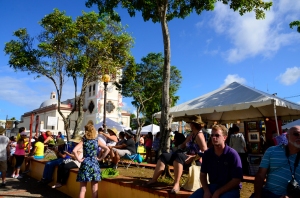 The parade route went along the side of the cathedral and the central plaza.

It wasn’t hard to tell that the time was drawing near because people started aligning themselves along the parade route.  We found our places and settled in, still attempting to stay in the shade (the umbrella of the person standing behind where we were sitting. 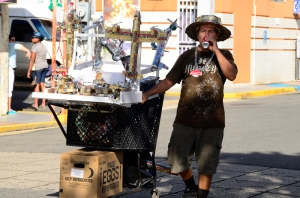 There were all kinds of characters wandering around before the parade, including this man who made hats from beer cans!

From the moment we arrived, we saw individual people walking around in various stages of “fully-costumed.”  Lots of tourists like us were getting snaps.  But really nothing prepared me for the arrival of the parade.  The floats (as I think of them from my WI perspective) were basically cars or all-terrain vehicles dressed up and practically powered by huge, loud, speakers and horns.  Each float was accompanied by costumed revelers “dancing” and creating havoc with shaving cream and energy drinks…both between themselves and the watchers.  The pranks are supposed to be in fun…

Thank God, and I do once again as I write this, for the man next to me.  He handed me a pair of ear plugs.  Only a absolute idiot would have refused them.  I put them in my ears and figured they had to be at least protecting my ears somewhat even if they weren’t helping much with the noise.  Only did I realize how much they were cutting out the noise when I was shouting to Gerry or Oscar and couldn’t even hear my own voice, though the noise from the floats was loud and clear.  That should give you an idea of exactly how loud I am talking! (Check out the videos on this page if you want to experience it for yourself.  I bet you will be thankful when you can click the stop button.  I could only stand 40 seconds!)

Wave after wave of these floats or “carrozas” came down the parade route, each trying to outdo the others in both noise, mayhem and costume colors.  The costumes were fantastic.  Just as the hat we used to sell, the costumes were made of individual ribbons of colored fabric sewn on to a base garment.  It was very disappointing to me that almost no one was wearing a mask.  I was assuming “máscaras” means “masks” –  I was wrong.  The term “máscaras” refers to the people.  Also, not everyone in the parade was wearing a costume, which kind of spoiled the effect. (Watch the slide show!)

After about an hour, all three of us had had enough of the noise, and we headed back to the car for the drive home.  So much for the Día de las Mascaras, the Festival of Masks of Hatillo.  Would I recommend you go?  Not so much.  There were some complaints in the newspaper about the festival the following day – complaints about the noise and the atmosphere of the parade. Perhaps something will change in the future.  On the other hand, it is an experience –  one you can appreciate once in person, and afterwards in your memories.