I am a huge fan of Wisconsin.  (“Wis-where?”  you say.) Wisconsin has to be one of the gems of the 50 states and one of the least visited (unless you have to go, or live in Illinois,).  No. Maybe I’m wrong.  Who would want to go to North Dakota?  (Actually it is hard to say that since I would like to go to North Dakota, but I can imagine someone who thinks Wisconsin is “Nowheresville” thinking that North Dakota is, too. My dad also used to refer to Wisconsin as “the land that God forgot” and of course, as teenagers, it was popular to call it “the armpit of America.”)

Being a fan of Wisconsin (and getting back on the subject) I feel compelled to convince you that Wisconsin is worth your travel dollars and time.  Today, let’s talk nature at my “farm.”

If you like nature, a trip to Wisconsin can provide you with both “domestic” nature (cows, sheep, dogs cats, horses), zoo nature (lions, tigers and bears, oh my!) and real, wildlife nature (cranes, raccoons, coyotes, wolves, bears, snakes, birds, birds, and birds!  Oh, and INSECTS!  But that will be for a different post!) 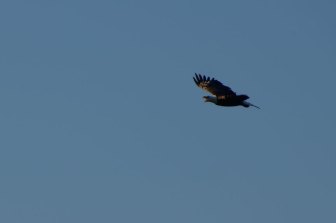 Angry eagle on the wing

Angry eagle warning me to scram! (Not sure you can see its open beak)

On my most recent trip to the farm (on which I have no domesticated or zoo nature), I got to see a San Hill Crane on her nest and a big ol’ raccoon (a big ol’ not old – it’s not an age concept).  I also watched the bald eagles around their nest.  These are the sightings that keep me making daily walks when I am there.

I can visit the eagles anytime I am there, except in the winter, when they are vacationing elsewhere.  The same pair returns to the same nest every year.   Each “spring” (a fluid tem when you’re describing Wisconsin) they refresh the nest and it gets bigger and heavier (eagles’ nest can topple trees!).  You’d have to refresh your nest, too, if you brought raw fish and small mammals home for an un-cooked dinner for your kids!

The eagles do not welcome visitors – I can’t say if that is “especially human visitors” as I don’t think they really welcome anyvisitors.  They definitely get annoyed when I come to check up on them (but so do my post-teenage sons – so maybe it’s just me.) They’re fascinating, though, and the more I learn about them, the more interested I am in going to observed them.  I cannot see into the nest, but fortunately, the “Decorah Eagles” (I’ll put the link at the end of the post) have a web cam so when I need an eagle fix, I watch that and know that “my” eagles are pretty much at the same stage.

I startled a raccoon the other day.  He (she?) was washing something in the creek and noisily bolted up a tree when I disturbed him (her?).  I was surprised by how big it was and how noisy it was.  No stealthy habits for that fellow (gal?).

Another day, I was out walking with my neighbors, who are really knowledgeable about all the flora and fauna of this area. They took me to see a San Hill Crane on her nest. Of course, I couldn’t see her.  I took a picture of the general area where she was supposed to be, and then zoomed in on the picture in the camera to find her.  Once she was pointed out, I knew where to look, both in real life and in the zoomed out photo. (I put the photo at the bottom so that I could make it bigger.)

Obviously, the raccoon I saw. This is what you get when you don’t have time to focus or check the exposure before you shoot.

Our family has a funny story about the cranes.  My older son, who hates the farm (city boy!), got up one morning complaining that he couldn’t sleep all night because of some lunatic clowns just outside his window.  Lunatic clowns???  Remember this house is deep in the woods, a mile from the road, and it is highly unlikely that there would be anyone outside his window, much less lunatic clowns.  My son can verbally imitate almost anything, so he gave us a demonstration of what he heard.  It was the cranes, for sure.  Still it was unlikely that he heard them right outside his window; more likely he heard them flying overhead.  He may have actually heard them all night long –since his “night” consists of six hours of morning daylight.

Deer are abundant.  Over-abundant.  When deer and car collide, unfortunately that means a lot of them end up dead on the side of the road, and many humans in the hospital or the morgue. The deer at the “farm” pose no danger:  You can’t travel very fast on the gravel road, meaning you could stop in time or see them with time to slow down.  They do bound out of the woods on one side of the road and magically disappear into the woods on the other side, leaving you with the thrill of seeing them and the longing to see them again.

It is wonderful to look for them in the winter and the spring.  They’re much easier to spot moving through leafless woods. In the winter, their coats are very dark brown and thick.  In the summer it is wonderful to see them, too.  In the summer, their coats are a tawny gold, and there are frequently fawns in tow. In the winter you spot them because they are moving through the woods.  In the summer, you are only aware of how close they are when you hear the thudding of their hooves as they bound away.  Usually all you see is the upward flick of their white tails.

My uncle has a large mowed area around his apple trees and that is where we always look for the deer in the summer.  That area is just at the turn in the gravel road to go to my house, so we slow down and peer down the road along the trees and frequently are rewarded with the sight of deer, but also turkeys and once, a coyote.

The deer in the winter

The turkeys are the most fun of the animals we see.  First, they’re goofy.  They’re goofy when they fly, they’re goofy when they run. They also make a goofy noise:  Gooble, gooble. Literally. Still, it is a thrill to see them.  On an Easter morning a few years ago, we were awakened by a huge show!  Two toms displaying for one disinterested hen.  Nothing goofy about a tom in full regalia!

This winter, milder and drier than most, on a very early spring walk, I happened upon an opossum.  Now, there is a goofy looking animal. His nose is fuschia!

The pond is a great attractor of migratory water birds: Wood ducks, mergansers and teals were all spotted last year, and of course, you can’t escape the mallards and the Canada geese. We also see the occasional great blue heron. Just to the northeast of the farm is the huge marsh where the eagles live and just beyond that, Lake Koshkonong, so water birds have many bigger places frolic.  Still I am grateful for the few who come to visit me!

So that’s it for installment one of why you should come visit Wisconsin.  If you’re anything like me (which isn’t a BAD thing) you like nature and animals, and seeing wild animals is still a thrill. (And don’t get me started on the plants…yet.) Future posts will talk about animals elsewhere in the state (we don’t have many bear sightings in southern Wisconsin), the cities, the cool geological places, parks (theme and natural), cultural Wisconsin and Native Americans.

Check out the nose.

Here’s the link to the eagle cam in Decorah, Iowa.  http://www.ustream.tv/decoraheagles

Sand Hill Crane on her nest. Can you find her? Hints: 1) She is not in the grass, but right out in the open, and 2) she has a bright red patch on her head.