And so summer ends – on a high note.

Downtown, seen from the Lake. Can you find the Art Museum (on the right hand side)

As usual, I am once again scrambling to finish up one thing before I start another!  (Isn’t that ADD?)

So first, I want to just talk about a couple of things we did with our friends Cindy and Greg from California, when they visited us in Wisconsin.

You have seen that I have already posted about our excursions to Taliesin and Holy Hill.  We also had three experiences in Milwaukee that you might find interesting.

The first was a “ADay in the Kitchen” at Coquette Café for Greg and Gerry.  This was much more than a cooking class:  It was a mini course on what it is like to run a restaurant!  The men had to be there at 10:00am to get started.  (From here on in it is all second hand, so I will try to be faithful to what I think I heard.) Greg and Gerry got to talk with both the Chef and the restaurant owner.  They explained some of the workings of the restaurant and gave the guys a tour.  They ate an early  lunch with the employees.

Then it was to work!  Chopping and cutting ingredients for the lunch service, the guys were working right alongside the regular restaurant employees.  Both were jockeying for a chance to go talk to the pastry chef, as he was in an air-conditioned kitchen on a lower floor, and the main work area was awful in the heat we had in Milwaukee that day.

After lunch came a wine and cheese pairing tasting – Greg doesn’t drink so Oscar, my younger (but already 23 year old) son showed up to try out Greg’s portion.  About 2:30pm they were released to come home, tired and sweaty!

Well, the “Day” didn’t end there.  Dinner for the four of us, plus two bottles of wine were included in the package.  Dinner was great!  I purposely picked the foods the guys told me they prepared and was particularly taken with an Asian slaw!  Oscar also came to dinner with us, and we paid for his dinner and the tip, but the rest was covered by the “Day in the kitchen” package.  Goody bags delivered at dinner included coffee, recipe books, and chef’s attire

Do I recommend this?  The guys had a GREAT time! So from that point, yes, I do.  It is, however, a special treat.  (Gerry doesn’t know yet, but he will when he reads this: His day had “Happy Birthday!” written all over it.)

Pontooners. It is amazing what grown adults will do when you ask them to hold still for a minute!

The second was a pontoon boat rental.  If you aren’t familiar with downtown Milwaukee, like most Midwestern cities of any size and history, it is located on a couple of rivers as well as the shore of Lake Michigan.  There is a lot of pleasure boat traffic on the rivers and the lake in the summer time.  We witness the steady stream of boats coming and going from the harbor right below our apartment.  The original rental was booked back in June when our son Gerry was here with his girlfriend and we wanted to do something fun.  The weather threatened that day in June, so we cancelled.  Anxious to use it before the end of the summer, Cindy and Greg’s visit seemed the perfect excuse. 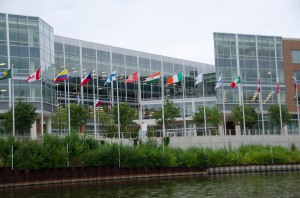 Sights along the river: Manpower headquarters

Our only problem was – where to find 6 people to join us.  Well, Oscar was an obvious choice, but none of his friends were in town.  Of course, we re-invited the friends who were supposed to go in June, and thankfully they pulled in some more friends and we loaded up the boat with 9.

Then, the weather threatened again!  What bad luck!  But this time we were fearless and like our pioneer ancestors, we said “What the heck! So we get wet?”  We all met at the dock at 6:30pm, armed with coolers of food and drink.  A very young man explained the rules, and admonished us (old folks) not to make a mess, and off we went. 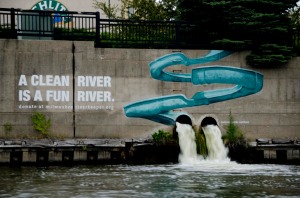 Sights along the river: I loved this. (The water is real.)

We were out cruising until just short of 10:30pm so got to see the city as dusk, and then night came on, the lights of the city pulsing to the beat of the music from the Harley Fest (more about that anon).  It had cooled off quite a bit and there was a brisk wind, but we had a lot of fun.  I definitely, definitely, urge you to try this.  The cost is really reasonable (just $200 for a four hour rental for 10 people.)  It would be a perfect get-together with friends when you’re tired of doing the same old, same old go out for dinner thing. I fully intend to do it next summer, too! 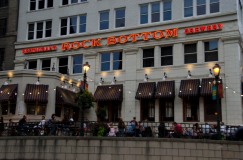 Sights along the River: Milwaukee riverside summer dining. Love it!

Sometimes one’s sense of humor extends out on to the balcony.

The lights pulsing with the music . (Ok, so it is really the boat moving up and down in the water. Same effect!) 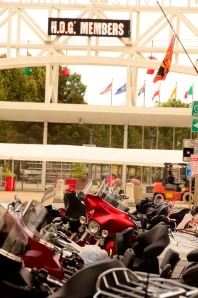 One of the things that made our trip special is that hundreds of extra people were in town to celebrate the 110th Anniversary of Harley Davidson.  So the Harley fest is the third.  There were so many activities planned for the four days the riders were in town, that even from the sidelines it was fun to be part of the excitement all those loud motors incited.  The night of our pontoon cruise was Friday, and there were bands all over the Summerfest grounds, which of course we could see and hear when we went out onto the lake.

Saturday, there was an art fair in the Third Ward, just across the street from where we live.  What great people watching!!  And the artists and artisans were interesting, too!  Though we didn’t make it to the big parade, all morning we could see spectators walking across the bridge to line the parade route north of us.  I expected to be able to hear it, but that was a bust.

Food truck visit at the Art Fair. For Oscar! Sure…

And that wraps up my summer 2013 in Wisconsin.  Almost everyone will tell you, so you should believe them, that Wisconsin is fantastic in the summertime.  I hope you have gotten a flavor of the kinds of things there are to do and to enjoy. Certainly, it isn’t lost on you how much I love it!