A Tale of Two Science Museums

I love science. So does most of my family, so visiting science museums is something we all enjoy.

Recently, I got to visit two: The Perot Museum in Dallas and the Frost Science Museum in Miami. On paper, there seems to be much in common between these two. Both are supported by wealthy local families… (That’s a good thing! Like all cultural organizations, the existence of deep pocket benefactors is essential for survival.) Both are located in major cities with large and culturally diverse populations – populations replete with adults who want the best education for their children, and who will take them to museums.

In my mind, science museums exist for adults as well as children and that is the glaring difference I observed between these two museums.

The Perot Museum is new! It’s “the latest thing” in the DFW area. It’s flashy and slick. It appeals to adults for those very reasons, but the museum is not designed to educate adults. the Perot museum is just a showcase for exhibits, and the intellectual level is for children.

The Miami Science Museum (currently) is just the opposite. The Miami museum is filled with engaging, interactive science. It’s old and dated. It feels well-used. It invites you to lay on hands and get involved. Adults can play with everything and learn right alongside the kids. Learning at different levels is possible and each exhibit and interaction is a catalyst for discussion between parents and kids, kids and kids, adults and adults!

We had so much fun in the Miami museum! There were docents in every room and eager to help you engage with the exhibits: petting sea stars and sea urchins, learning about electricity, talking about snakes and horned lizards. there is even a raptor recovery center (which unfortunately we didn’t get to see). In the exhibit about human health, we got to check our blood pressure and BMI, evaluate our stress levels and eating habits, and be part of a University of Miami research project. In another exhibit we could try lifting each other up by pulling ropes located at different distances from our seated weight. We got to pretend to be yoyo’s ( some might think that wasn’t much of a stretch!) We got to be facially-recognized. (My first time it thought I was a 33 year old male and the second time was closer to my reality, middle-aged female). We got pictures of our heat signatures. We saw mangroves growing, we saw corals, sponges and sea horses growing in a nursery; we learned about hydroponics. We learned the mechanics of a pitcher’s throwing movement; we learned how cars run on compressed air…I could go on and on. We were there for several hours, and as I said, we had a great time. The fact that I can remember so much of what we did, speaks to the level of engagement we experienced.

Sea horses! What a treat! 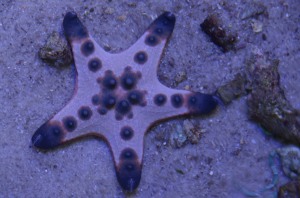 Here’s a sea star (not really a star “fish”). We could touch them!

Got to love it! 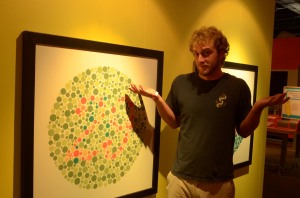 He’s color blind…the shrug says it all. He can’t see that number. Can you? 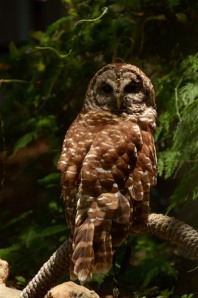 Not a TCU horned frog … 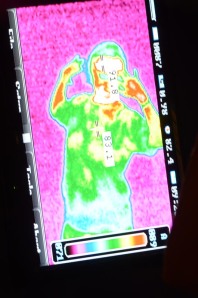 Heat photo – who else?

This docent exhibited the patience of a saint, trying to explain electricity to 3-4-5 year olds! 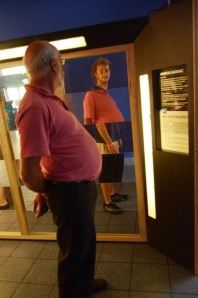 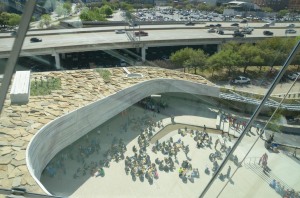 From above, this gives you an idea of how crowded it was.

To give the Perot Museum a fair chance, the day I went the place was packed.  PACKED! Packed with people, mostly kids. I didn’t see any depth in any of the exhibits I looked at. There was no sense of exploration or discovery…just exhibits to look at with facts on them. They were very nice to look at, but I experienced none of the invitation to engage with science that I felt in Miami. Maybe one can engage with the exhibits, but it was so crowded the day I was there that I don’t even remember seeing anything like that.   I also want to say that although you can go online and reserve tickets, that turned out to be a farce.  “Oh, you don’t need a ticket for today” I was told when I showed up with my ticket acquired online… This after having traveled to Dallas with my son Gerry to visit the museum a couple of days earlier and being denied entrance because the tickets were sold out.

Hmmm.  Not a good impression!

There was an exhibit about earthquakes with a platform you could stand on to experience the different magnitudes of quakes, but I had to watch other people doing it because the line to stand on the platform (even at 15-20 people at a time) was so long, it might have taken 15 -20 minutes to get to enjoy the experience. My attention span is not that long. The museum had exhibits on human evolution ( honestly I didn’t expect to see that in conservative TX!) and dinosaurs (always one of my favorites!).

I love dinosaurs. Very nice to look at. 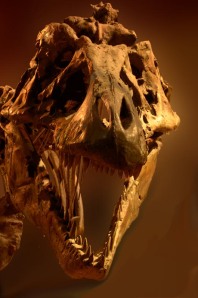 Yes, I do love dinosaurs! 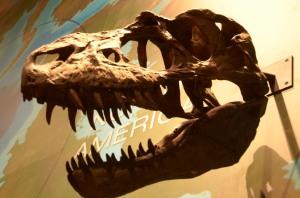 I did learn something. Tucked away in a corner I found an exhibit about a man who builds prosthetic legs. It was a science career exhibit, and that I learned a bit about what kind of training he had and how his interests led him to that field.

The exhibits are wonderfully created and laid out. They are colorful. But there is a lot of reading and not so much doing.

In talking about these experiences with a friend in Miami who is familiar with the board of the science museum there, I discovered that the science museum in Miami is undergoing a huge expansion – new facilities – lots of money. I sincerely hope it retains the spirit of the current museum and does not opt for the “slick, pretty to look at, but shallow” concept that seems to rule at the Perot. I also hope that with the much touted expansion currently planned for the Perot, that it will invest in more engaging exhibits and in more depth – so that adults, as well as children, will learn something new each each time they visit.

This is an exhibit of the different ecologies of Texas – built on the roof. You can see it from the windows. I am not sure how it will be incorporated into the educational scheme of the museum.