Quito for the Day

Panoramic View, much reduced, of the city of Quito from the top of the Teleferico. You can see it larger if you click on it. (Might have to use your “back” arrow to return to the narrative.)

Saturday morning, our group was complete, Linda and Glenn having arrived around midnight on a Copa Airlines flight through Panama.  Today the plan is to visit Quito – as much as we can do in a single day.  Quito is one of the up and coming destinations around the world according to Trip Advisor.  Post-visit, I have to say that it merits far more than a single day, especially because for me, one of the joys of visiting cities around the world is just “being there”, taking time to sit and people watch.  We did not have time for that on this visit.

Still at the hotel, right after breakfast, we met our driver for the day, Jorge, and planned the morning to include the Teleférico and the Mitad del Mundo – two recommended activities that required driving around the outskirts of the city. After lunch in the historic center we would tour the old part of town on foot.

Beam us up, Scotty! Ready to board the gondola to ride to the top of the Teleferico.

The Teleférico was first. What a wonderful introduction to Quito! Thankfully we arrived early and our line was short. The gondola ride up to the top took about 20 minutes, with beautiful views of the entire valley and the city of Quito stretching below us, unfolding slowly, revealing the valleys and farms and villages on the edges of the mammoth city.

An interesting aside for you who like to mix your heights with feats of physical prowess:  You can take your bike to the top and ride it down if you so desire.  I imagine that requires pretty good brakes or a great helmet!

That’s Quito from the Teleferico.

Once off the gondola, it felt like we were on top of the world! Everything was so far below us. Actually not everything, as there were still mountains higher than we were. The beauty of the area at the top of the ride was marred somewhat by the presence of cell phone towers, but as a spectacle they couldn’t compete with the views.

We spent about a half hour at the top, tried some coca tea (an unremarkable experience) and rode the gondola back to “earth”. Barely 11 am, the place was packed and the lines quite long.

From here we drove to “La Mitad del Mundo”. This attraction is actually two different ones, both celebrating the equator. One is a huge monumental marker placed by the French in the 1800s which though photogenic is not accurately on the equator. The other (and the one we visited) is a “museum” purportedly of Ecuadorian history but really a mishmash of displays leading to the main event – the science of the equator. We tried to balance an egg on a pin, saw demonstrations of the Corolis effect and tested our strength at the center of the world. By the time we finished, it was 1:30 pm and we were starved for something to eat. 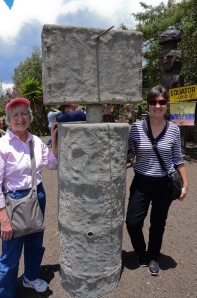 Joanne and Linda at the center of the Earth at noon exactly!

Another long drive (I would say that is the theme of Quito in general; everywhere involves a long drive) got us to the historic center of town. A huge traffic jam forced us out of the car to walk to find our lunch destination, an interesting sounding place called “Hasta la vuelta, Senor”. The restaurant was recommended to us by a young traveler Linda met the night before on her flight. It is located on the third floor of the renovated Bishop’s Palace, now an emporium of shops and cafes. It was a cute place and even at 2:00 pm on a Saturday afternoon we had to wait for a table. 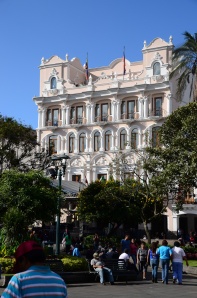 The Bishop’s Palace – now a hotel

Fortunately, we were in Quito in the pre-Easter season and so had the opportunity to try “fantesca” an Easter specialty, a soup with 12 grains. Miriam had told us about it the day before and it sounded really interesting – and it was delicious! “Grains” was a stretch, but then maybe “granos” can be more loosely translated. The soup was mostly different kinds of beans, in a creamy base with excellent flavor… both hearty and filling. Ours came with dried salted cod on the side, and we ordered it “complete” which included Ecuadorian mashed potatoes afterwards (definitely too much food) and warm rice with cinnamon in milk for dessert (unforgettable and repeatable).

The name of the restaurant requires further comment. The name is based upon the antics of a certain monk who would escape from the monastery at night by climbing up the crucifix to access a window and freedom for his amorous exploits. Each night, the Christ on the cross would ask him “Until when?” and the monk would reply “Until I return, Lord”.

Building (probably City Hall?) on the main square in the historic center of Quito

Following lunch Jorge took us for a sort of half-hearted guided tour in the old city.

The column of historic symbols in the main plaza of Quito’s historic center.

We started in the central plaza right in front of the Archbishop’s palace, where we saw a column, laden with historical symbols. Across the plaza, was the cathedral, but we didn’t visit it, opting instead to walk to the Iglesia de la Compañía de Jesus (Jesuits), one of the top visitor must-sees in Quito. Unfortunately, tourist visits end at 4:00 pm on Saturdays, so we had to go off and return an hour later when the church would be admitting worshipers for mass. Since you cannot take pictures inside at any time, we did not miss that. However, we were still able to wander the entire interior and marvel at this spectacular, gold-filled edifice that even the word “beautiful” does not do justice.

The only interior shot I got in La Compañía before I realized that one could never take pictures inside. 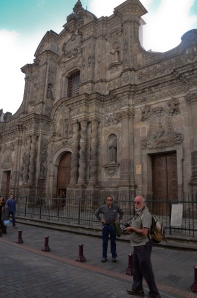 This is the front of the Iglesia de la Compañía de Jesus. (the man with his arms akimbo is Jorge, our guide.

The interior of San Francisco

In the hour we had to kill, we went to visit the San Francisco church. Though not as opulent as “la Compañía”, the Franciscans enjoyed a smattering of splendor, too. (Click on any of the images to see them all larger.)

The light of the late afternoon was beautiful!

By this point, Jorge was ready to leave, so Joanne returned to the hotel with him by car and the remaining five of us decided to walk back. The walk should have taken maybe an hour, and would have taken us through or near two of the important parks in the city, but an excess of touristic zeal turned us toward the “Basilica.”

The façade of the Basilica

It looked like a short (especially as the crow flies) walk, but since we were earth-bound it took us first down and then way up the one of the many hills of Quito in an exhausting climb that left us all gasping for breath and behind schedule. (Oh, and I forgot to mention that there was a grocery store stop delay, too.) As it was evening and getting dark, a sense of urgency began to invade the walk as we did not want to get caught crossing the park in the dark. It was getting dark earlier than the clock suggested because of looming dark clouds, threatening rain, but even that explanation did not dispel the sense of dread that we would be out after dark, at the mercy of who knows who.

More afternoon light, but the Virgin (not an angel) on the pedestal in the background is a copy of the statue in San Francisco Church.

Picturesque look at a downtown Quito street – note the decline…

But, no matter, we did make it through the park at dusk, while there were still many young families enjoying the out of doors, and we were back at the hotel by 7:00 pm. Tired, and still full from our late lunch, we skipped dinner and went to bed early. Tomorrow our cab to the airport will pick us up at 4:00 am. 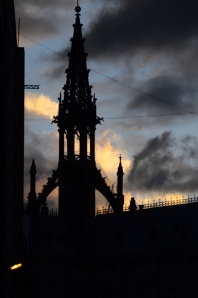