I am writing this several days later.  The last few days of all my journals get short-changed.  This time I am making a resolution to write to the end no matter what.  Since I don’t record (so far) the date I am actually writing, it won’t be noticeable to most.

This is the first full day we had our little car, so we decided to make the most of it.  After breakfast we headed into town, Charlestown, to see the “sights.” Along the drive to town, we stopped to see an old church, one of many on the island.  Even the cemetery had a good view! 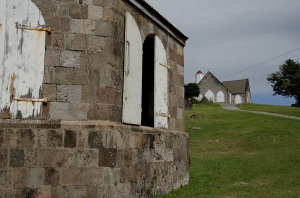 We parked along the waterfront, basically right in front of the Alexander Hamilton House, conveniently so since that was one of the places we wanted to visit.  In the lower level of the house is a museum about the history of Nevis – very interesting actually.  The one thing that really stuck with me is that the name Nevis, came from Columbus’s naming the island “Nieves” because the fog on Mt. Nevis looked to him like snow (or so the story went…).  That actually explains why Nevis is pronounced “knee – vis” rather than “neh-vis”:  An English-speaking person would interpret the Spanish “ie” as “ee”.)

Next door was another part of the museum, this one dealing with the life of Alexander Hamilton.  Though he was born in Nevis, he didn’t spend much of his life there, but his career was still an interesting one.  Why he allowed Aaron Burr to shoot him in their duel, was not explained.

From there, we walked the main street.  I kept trying to get pictures of the street, but was unsuccessful at capturing what it really looks like.  You can mentally remove the signs and the wires, and imagine you’re 200 years in the past – enjoying the colonial architecture with its distinctly Caribbean flavor.  That flavor extends right down to the empty lots and barnyard animals in the streets and no modern concept of city limits. 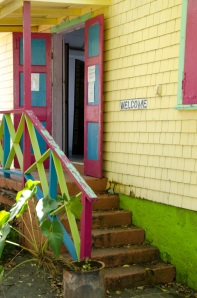 We walked pretty much the entire length of the main street and headed for the hot springs on the south edge of “town”.  The Bath Hotel still stands – though I am not sure what use is currently made of the building, it is in good shape, up on a hill overlooking the stream and the pools of the hot baths.

The stream area and the bath house are in ruins. I found it interesting that Costa Rica has made an enormous tourist effort around the same natural phenomenon, but here – nothing. The stream is filled with rocks and debris from a hurricane or earthquake (I can’t remember what exactly) and was never restored. The bath house itself doesn’t look that long abandoned…the main floor is filled with bath tubs, and you can go downstairs and see a series of chambers with their own pools. Outside however, there are two man-made pools.  One is covered with a roof (necessary because of the heat of the sun) and the other open to the sky.  We checked out the open one first as there were people in the covered pool.

The water was HOT, but so were the tiles, and the pool uncared for.  We backtracked to the covered pool and talked to the people there (and got into the water up to our knees).  One, a man who had been in a bad car accident in NY had returned home to use the pool to recover his mobility and to avoid surgery, he told us.  He swore to the hot water’s medicinal effects. (There is some lore about the sulfur content of the water that adds to its powers, but we certainly did not smell any sulfur, so I have to wonder about that.) The other was an elderly woman. She also had stories of miracle cures to tell us, as well as a story about how a spring on the other side of the island was stopped up and everyone could hear this ominous rumbling as if an earthquake were imminent. When the spring was unstopped, the rumbling stopped, too.  Whew!  Just imagine if a stopped up spring could cause an earthquake.

Leaving the pools, we headed up the hill towards the former hotel.  Along the way was an enormous tree! Judge for yourself, I am going to add the photograph. I would have loved to have seen old pictures of it just to see how it happened to grow there and have produced the unusual shape (multiple huge trunks with relatively sparse branches). We continued to the top of the hill, but decided it was really too hot to keep walking and so went back and got our car.

We tried to find the St. Charles Fort, but that was a bust.  We found the sign, but the ruins of the fort seemed to be covered completely with vegetation, and were within the grounds of what looked like a half-built or deserted residential development that I wasn’t really interested in walking into. (We were focusing on “The Heritage Trail” sites on our local map.)

We then searched for a place for lunch – Rodney’s – which we read about in a review.  We found it, a very off the beaten path place, that felt like we were walking into someone’s house.  It was a bit past the normal lunch hour so we shared the restaurant with two local men, most of whose conversation we couldn’t understand!

We asked Rodney to choose our food for us because we wanted to try different things.  Gerry got a steamed fish with root vegetables and salad on the side.  I got a sort of stewed cod with a piece of mackerel, the same veggies and salad. My fish was reconstituted salted fish, so it was salty (for me) but I think we were pretty pleased with our meal.  It was the most typical food, the only typical food, we had eaten so far.  My favorite part of the meal was the ginger beer – I had two of them and I will try to make it myself someday.

After lunch, we still had enough energy to go visit two more of the four plantation hotels on the island.

(We had visited Golden Rock already and intended to skip Nisbett on this trip.)  First we found Mountpelier, my favorite!  What a beautiful place.  Very old colonial feel to it – enough so that you could imagine you were actually on the original sugar plantation.  The common rooms were gorgeous. (Our weather was not, however.  These visits were carried out in intermittent rain with grey skies all day).

Our second visit was at the Hermitage, the smallest of the four. Very colorful and cute. But it was too much of a contrast to Mountpelier to make a big impression on us.  And, as I said, the weather was not much help.That concluded our touring for the day and we returned to our hotel for a rest. 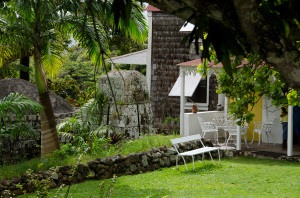 About 5:30, Sarah and Greg (new friends we met on this trip, using the same Groupon for the same 4 days) came over for a (?) glass of wine and we sat out on the balcony and talked through the sunset and into the evening.  We had all wanted to go to Mountpelier for the pig roast but an earlier call for a reservation revealed that the evening was sold out.  I convinced Greg and Sarah to go try Lime, which they did, and Gerry and I went to the Pizza Beach restaurant that is part of our hotel.

Surprisingly, or maybe not, I have found all the evenings here in Nevis to be cold, and at the pizza restaurant on the beach it was windy and cold.  Fortunately the windows toward the beach were shut.  The food was OK, definitely not memorable, but maybe I was just too cold to enjoy it.