Saturday (February 2, 2013) we spent about 4 hours in The La Marquesa Forest Park in Guaynabo.  We went to take pictures and as you will see, there were plenty of pictures to take.  I wish that I could recommend this park as a tourist destination, but I can only do that with some strong qualifications.

The road to the park is very scenic and pretty and the promise of an adventure is strong and enticing.  the place is very clean and there is ample parking.  Our first disappointment was that the cable car system that takes you to the top of the mountain, where the butterfly garden and the aviary are, is out of order.  Instead we took a little trolley-train.  That wasn’t a bad thing, just not what we had hoped for.  And due to the numbers of people who had to be transported this way, it was a bit of a wait, and then our group was split up, with the first group having to wait almost 20 minutes for the second.

Newly emerged in the incubator portion of the exhibit

At the top you discover a work in progress.  The butterfly garden and the aviary are built and functioning, but the rest of the building is empty and there is no place to get even a bottle of water.  (That is something that I think a first class tourist destination should have.  I understand that they do not want any food in the butterfly garden – that would attract ants – ants would eat the butterfly larva … but something!  Especially, because as I will discuss later, this is a place to bring children.) 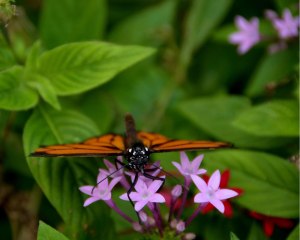 One of the few fully emerged and living butterflies in the garden at the time we went.

Once our group was reassembled we were ushered into a room to watch a film about butterflies.  Good, right?  Not exactly.  The film was of very poor quality visually (as are the ads shown in the movie theaters here), the sound quality was terrible, the presentation was boring and deliveryed in big words and a monotone (remember those children I mentioned – to a one they were bored and squirming).  It was also only available in Spanish.  More than half the people in the room with us watching did not speak Spanish (and those that did were horrified by anglicisms like “flasheo” for flash – as in flash pictures).

We exited the movie into the butterfly garden.  I think there might have been 10 all together, including the dead ones in the water.  It was very disappointing.  Our leader told us that a couple weeks before when he had visited the place was full of butterflies:  That means you should check before you go to find out how many you can expect to see – there is obviously a cycle thing going on.  The preview film would lead you to believe that you are going to see all kinds of fantastic native butterflies.  Maybe you do when there are lots of them.  All we saw were monarchs. (Oh, and a grasshopper!)

From the butterfly garden you walk directly into the aviary.  Do not expect to see local birds, not even local parrots.  All of the parrots in this enclosure (and it is a very nice one! No joking!) are exotic species.  They are fascinating to watch and to take pictures of.  They seem to be naturals at posing!  Despite warnings about how hard they bite, there were a few friendly ones who though nothing on climbing right on you and nibbling your clothing.  There are many different birds – all kinds of colors and sizes.  It is a paradise for kids who are not afraid of birds and a paradise for people who want to take pictures of them like we did.

Right after this picture, this little parrot hopped on the boy’s shoulder and was rewarded with ear-splitting, bone-chilling screams, as were we all! 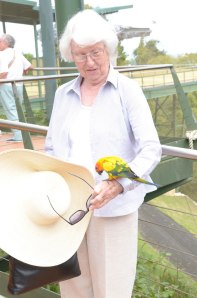 He got a better reaction from this lady from Georgia!

Beyond the aviary and the “mariposarium” there is a lookout tower with a fantastic view.  It is quite a hike UP (a steep hill and then lots of stairs) but the view from the top is worth the exertion.

Gerry and I decided to walk back down to the parking lot.  That was not such a brilliant decision since the maps are TERRIBLE!  The map they gave us was about 4″ x 4″ and reproduced at such low quality that you could not use it for anything.  As a result, we tried to do the route from memory after studying the boards that are up in the park.  I’d love to go back and check their accuracy – we got lost twice.  Both times we had to backtrack a good distance to get to a place that could get us back on the “right” course.  We eventually made it, but if you’re not the type who likes to wander through the forest, it is best to wait for the trolley/train and ride back down.

Found during our forest wander ...

I really like to be a cheerleader for the local initiatives to provide visitors with something to do other than sit on a beach – Puerto Rico is so much more than that!  However, until this park gets its act a little more together, I can only suggest it now as a place to take kids or as a place to walk for exercise.  I’ll keep you posted in future visits – and hopefully be able to change my mind or recommend the best time of year to go.

A gorgeous view of the hills around Guaynabo, too. It makes you feel like you’re way out in the center of the island.