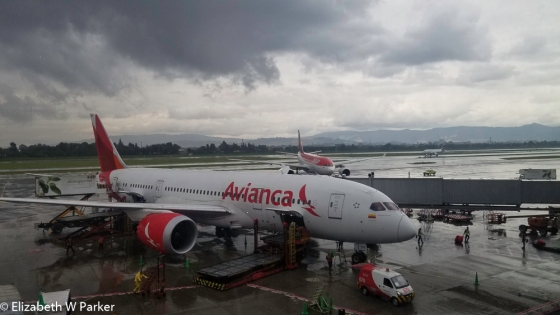 Not sure if this was in San Juan or Bogota.  Either way, you won’t see it again in future blogs!

The Trip: Getting there

Skip this section if you only like an upbeat travel blog! I am serious.  You can click here and just forget about how we got to Bari.

An inauspicious beginning never bodes well, short term.  (I am leaving my long-term expectations intact for the moment.) The beginning I speak of is the departure for our Italy sojourn by our traveling companions, Jon and Galina.  They were leaving on Monday and we on Tuesday to meet up on Thursday in Bari, Italy. (We were all starting from San Juan.)  We had the same flights reserved from San Juan: They on Monday, we on Tuesday, with the same airline.

Monday morning, they found out when they went to check-in that they had no flight.

Some SNAFU with a change in their departure date left them with a flight that had not been paid for and was subsequently cancelled.  The flight they had paid for was also cancelled but the payment neither credited to the new flight nor refunded.  Buyer beware!  Four hours of hassle and, instead of flying San Juan-Bogota-Madrid, they went San Juan-NY Kennedy-Iceland… and from, there, I am not sure.

“Look what happened to them,” we said innocently.  We had already checked our flights with the airlines several days ago and everything was in order. Well, Tuesday at 2 PM we received a message, not from the airline but from an app I use called TripIt, that our flight San Juan – Bogota was so delayed that we were going to miss our Bogota – Madrid flight. We called the Avianca 800 number. Could Avianca help us over the phone? Oh, no!  We had to go to the airport for that.  We did.  Could the airport personal help us?  Oh, no!  We needed to call the 800 number.  (So, should you fly Avianca?  I doubt we will.)

So, now here I am in the San Juan airport…killing time until my delayed San Juan to Bogota flight.  I can get to Bogota and supposedly spend the night (Hotel? Sleep in the airport?) and fly out to Madrid tomorrow afternoon at 2…I have already cancelled a hotel in Madrid (no refund, but I wanted to be nice and let them know they could give the room to someone else…) I am about to call and cancel my flight from Madrid to Bari for which, by the schedule, we will have 30 minutes to make the connection (customs and a terminal change…what do you think??).

The lesson for today:  Be flexible and don’t lose your sense of humor or sense of adventure.

(I am trying to live that as I write it.)

I will admit that I wasn’t feeling particularly flexible and my sense of humor and adventure took a short vacation, but apparently the issue was hunger.  As soon as I had my dinner on the plane (10:00 pm) I felt much better.

So far, the trip has been a disaster.  We missed our flight from Bogota to Madrid last night, which we knew we would. Avianca in San Juan checked our suitcases (they were overweight for the cabin…note their limit is 10 kilos) all the way to Madrid, even though they knew we would be spending the night in Bogota.  As a result, we arrived in Bogota after 11:00 (time has changed to one hour earlier) and had to go to the baggage people and get them to remove our baggage.  That took more than an hour, so we missed the last shuttle to the hotel and had to take a cab, which meant we also had to change some money.  Oh, the repercussions of a delayed flight!

We got about 5 hours of sleep in a Marriott near the airport. Getting to the hotel took about 15 minutes because of all the one-way streets – returning to the airport took just 3.

We got up this morning and booked a flight from Madrid to Munich to Bari, assuming that we could not navigate the airport in Madrid, including immigration and customs and changing terminals in 30 minutes.  The new flight gives us 4 hours to make the connection…and good thing, too…today’s flight is also already delayed.

As I write now, I am back at the airport in the Avianca Lounge waiting for our flight at 2:30 pm. I am guardedly optimistic that we are going to make that Munich-Bari flight tomorrow.  I am happy, too, because it means the last leg we will be on the same flight with Jon and Galina – much easier for us all to get the rental car in Bari together.

My crystal ball sees some major exhaustion by tomorrow night.  We will have spent 3 days in transit.

Let’s get to the fun part – the trip around Puglia with Jon and Galina! Click here.