My narrative picks up on the following day, Saturday (July 23rd) when we drove to Oxnard and Ventura to visit with friends.  These friends, Pam and Bob, lived in Puerto Rico until the beginning of June and were members of our book club.  It was bittersweet to see them ensconced in their new home.  We missed them even before they physically left and, seeing them again, picked up the narrative of our friendship as if it had never changed location!  We marveled at their new house – Oh! Such echoes of their unique, colorful house in Puerto Rico!  We were able to have an extended lunch together in Ventura at a place called Brophy Bothers Seafood.  Right on the wharf in Venture and looking out, we discussed all the topics of the day…Politics was, of course, high on the list, the Republican Party’s National Convention having just concluded.  It was wonderful that their college-age daughter was along, too – It’s nice to get a different perspective!

Facade of the Buenaventura Mission

Later that afternoon and before heading to our hotel in Summerland, we stopped to see the Buenaventura Mission in Ventura. It is the first of many missions we will seek out over the next few days and, in hindsight, one of the least impressive.  All the missions have had 9 lives, but most, like this one, are still or again functioning as parish churches.  Buenaventura is in an urban setting now. We were interrupted by what appeared to be people down on their luck and perhaps a few pills short of sanity.  I think the mission caters to a homeless population. 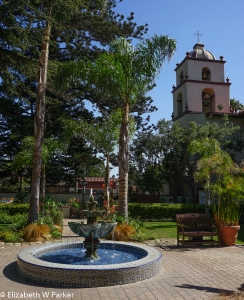 Saturday night we stayed in a hotel named The Inn on Summer Hill in Summerland.  We really liked it!  Our room was spacious, our high bed had a deep, comfy mattress. We had a fireplace and a view of the ocean.  I could recommend it for a romantic getaway or even a solo get-away when you just want to read, or write, or draw, or think…A wonderful place.  It even has afternoon tea, and nightcap service, and breakfast is included. (You can get it served in your room for just an extra $5!)  We stayed just one night, but loved every minute. There was just one negative – it was hard to enjoy our porch overlooking the ocean in the evening because of the noise of the traffic.

Sunday (July 24th), we started out in Santa Barbara.  The city is instantly appealing.  The architecture, whether old or new, conforms to either the Spanish adobe revival look or the beach bungalow esthetic.  It is clean and neat, filled with flowerpots.

We visited the Santa Barbara Courthouse because everyone online said to do that…and in this case “everyone online” gave very good advice!  The building is amazing!  Built in the 1920s, in the Spanish revival style, inside are marvelous tiles covering the walls, stairways, nooks and crannies, you name it.  The parts that aren’t tiled are painted with Mexican influenced designs giving an overall feeling of an old Mexican period building still at work. In one of the main courtrooms on the second floor are some amazing murals about the history of California – here you’ll see names and figures that repeatedly crop up wherever you go.

At the top of the tower is a lookout, from which you can see 360 degrees of Santa Barbara, but not so spectacular for us as our day was foggy and overcast.

From the courthouse, we drove through the streets, admiring the neat houses and yards, to the Santa Barbara Mission.  Perched somewhat higher than the city that hugs the beach, the mission is situated so as to give you an open and impressive view of the façade of the church. Unfortunately, it is marred by the parking lot smack dab on its steps – which was full today because we arrived just as mass started.

We did the self-guided tour, minus the basilica because of the mass. The singing from the church was actually the perfect musical accompaniment to our visit which included a museum, a cemetery and, of course, a gift shop. We watched a short film about the mission, one that seems to be repeated in every mission with just slight variations, but which is certainly interesting the first time you watch it.  Since each mission is just that much different, watching the equivalent at the other missions is not something you should skip.  Just be aware that some of the information you will already know… 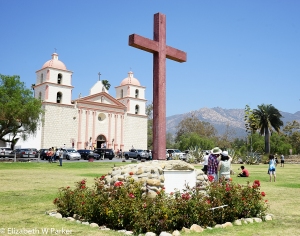 The Santa Barbara Mission (1786) is very picturesque, but in addition to the cars parked on the church steps, the place is crawling with tourists everywhere you look.  Those pretty pictures you see in brochures?  You’re not going to get them!

Our last stop in Santa Barbara (we skipped the wharf because of the traffic near the water) was to see a second Moreton fig (ficus macrophylla) tree, both brought to Santa Barbara from Australia.  The first one was in the mission cemetery.  (Oh!  And by the way…do you remember the book Island of the Blue Dolphins by Scott O’Dell? The young woman whose story is recorded there, Juana Maria Arellanes, who lived alone on an island in the Santa Barbara channel for 18 years before being rescued, is buried in that cemetery.  Literary pilgrimage!)

The second, and famed, “fig” tree is nearer the beach.  It took us some maneuvering, but we finally found it…and huge is an understatement…Immense? Enormous? Gargantuan? Gigantic?  Not sure if there is a word big enough! [I have to admit: Later in this trip I will see the giant sequoias of Yosemite.  Yes, this fig is huge. But not in the same way as the sequoias!] The tree is on the California Register of Big Trees.  [Did you know such a thing existed? I also found a national registry.  The link I found does not have the Santa Barbara tree as the largest of its species in CA.] The last time it was measured was in 2010 and then the canopy spanned 198 feet and the diameter of the trunk was 12 ½ feet measured just above the roots.  It is over 80 feet tall and at least 119 years old.  Not in the league of the giant sequoias, but an enormous tree nonetheless! 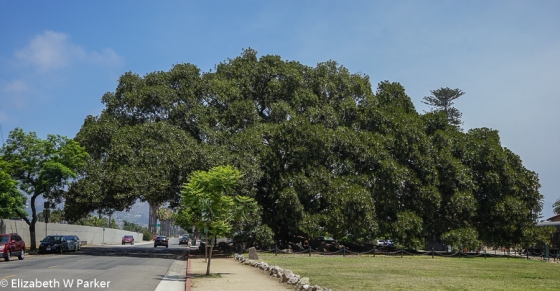 Moreton Fig Tree in Santa Barbara (Compare to the car driving under it!)

From Santa Barbara we started a road trip that would take us eventually to Carmel.  First stop along the way was lunch in a cute little town called Solvang, which was filled with Danish references.  Solvang is also known for the 21 wine tasting rooms that represent the many wineries of this region.

We stopped for lunch here at about 2:30 and then went to visit the mission, this one dedicated to Santa Ynez.  It is really lovely!  It is on the outskirts of this small town, surrounded all around by agricultural land, that in the drought of midsummer registers green and gold.  The Santa Ynez Mountains rim the valley under a splendid blue sky. Though this a wine region, and there are wineries to visit, it is still “lunchtime” for us and we have a long drive to our hotel.  We focused on the mission.

The mission is yellow adobe, a warm color that seems to glow softly in the summer sun. The interior of the church is mostly painted decoration, and the huge “cloisters” area is framed by Spanish arches. The interior courtyard is a mass of gardens.

The mission era in Alta California was not long lived – probably only about 80 years.  This mission had one of the shortest lives, as it was built late in the era (1804).  California was still part of Mexico up until 1848.  Mexico decommissioned all of the missions in 1834, and while some continued to function, many fell into ruins or were converted to other uses.  Most had to be rebuilt various times, and almost all of them suffered heavy damage in the earthquake of 1812.  In Alta California, all 21 missions were run by Franciscans,  [The Jesuits ran 17 and the Dominicans 2 in Baja California].

Tucked away in a corner of the gardens is a little shrine with Saint Francis and the wolf of Gubbio.  This legend featured strongly in our trip to Gubbio and Umbria last October.  Seeing it here, now, got me to wondering if, had I never been to Gubbio, would I have even registered this shrine at all?  It also made me think about the circularity of life…together with our dinner with Peter and Marilyn, this is our second reference, on this trip, back to the Umbria trip.

Just 24 minutes away, in Lompoc, is our last stop for the day, a mission called La Purisima Concepcion (1787).  This one is a state park and has been restored. We arrived just after 4:00 pm and were admitted without paying since the historical buildings are closed at 4:30 and the park closes at 5:00.

This was the best mission experience so far!  The restoration work was accomplished by the CCC (Civilian Conservation Corps) in the 1930s, but it feels very original. The place is very large and it was the first chance we got to see what a whole mission might look like, complete with animals in pens.  Rooms had been recreated for the soldiers, for the administrators and for the padres.  So in addition to the church there was a lot to see.

The first building was where the soldiers and the administration of the mission lived and worked.  Here we saw a barracks room, dining room and workshops.   The head of this part of the mission was an overseer, whose quarters were rather luxurious (mostly in contrast to the rest, but also for the times).  He would have lived here with his wife and family.

The second large structure was dedicated to the two padres assigned to the mission.  One was in charge of spiritual affairs and the other of temporal affairs.  Their quarters were also fairly luxurious, and included guest quarters.  Apparently, their company was quite sought after and evenings here could include lively conversation, readings, music and more.

Though I haven’t mentioned him, Father Junipero Serra, now a saint, was the force behind the mission movement in the Americas. Here, I have focused on the architecture, the legacy of the buildings; the controversy of Serra is material for a different post. [We also visited the San Diego de Alcala Mission (1769)in 2014.  While in the Monterey area tomorrow, we will visit one more, San Carlos Borromeo de Carmel (1770).]

It was a long drive to our hotel in Carmel.   In planning the trip, I thought we could establish a base hotel and tour within the radius of the hotel about what we would drive in a day…It was a good idea, but not practical.  We needed an interim stop between Ventura and Carmel. Because of the distance and the Soberanes fire, we did not get to see the Hearst mansion on this trip.

Our hotel for the next three nights is the Hyatt Carmel Highlands.  I did not know when I booked it that it is a timeshare hotel.  We dodged the presentation-of-the-timeshare-concept-bullet thanks to the Soberanes fire (more on that later). Our room was very nice with a real fireplace – we needed it – temp was down in the 50s.

Dinner in the hotel was excellent (Pacific’s Edge Restaurant). It was one of the few “splurge meals” we will have on this trip…Not because we were avoiding them, but because around the national parks there just isn’t a plethora of great eating establishments.  Thankfully this is CA where the food is better than average, but the few times we had really civilized meals, with excellent service and memorable food?  These we would count on the fingers of one hand on this trip. Our dinner was good – we went back the following night for the same dish!

Click here to keep reading about our days in Carmel and Monterey.