Map of Rab Island. Just to the left of the “R” in Rab is where our hotel was located. Notice the green areas: They are all sheltered from the bora wind that comes from the green area you see on the far right side of the map. That is the Velebit Mountains national park area. The walk I will describe today winds from our hotel around the southwestern corner of that part of the island.

Today our walk was about 5 miles or so, starting first in the town of Rab and exploring its historic core.  The city has been here since Roman times, and there are buildings, notably the ruins of a church, from as early as the 5th century.  During the Venetian heyday, this was a stopping point for ships headed to exotic lands like Lebanon, plying the spice trade on which the Venetians had a monopoly.  The ships would return about 6 months later, Rab was the last stop before reaching their home port in Venice. It is clear that Rab provided a port well-protected from both weather and pirates.

Our walk wound around the long narrow inlets I mentioned earlier, skirting gorgeous old pine forests.  The shoreline is mostly rocky, beaches were more often pebbles, than even coarse sand. Little coves often had a bar or restaurant, and there were sunbathers, though the season is just getting started.  The town of Rab has a fixed population of about 6 thousand, which swells ten-fold during the summer months.  This is a very popular place for Croatians to have a second home, but it also attracts German tourists. (Part of our walk took us through a nude beach, bathing suits not optional, but forbidden!) 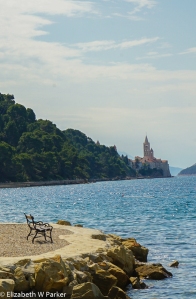 A look back towards Rab, once we were out and walking along the coastline.

We left off walking and boarded a boat. Our driver was a large fellow named Mario and our guide a skinny fellow named Eros (no kidding). We cruised along the coast of the island, in and out of the inlets, the sea a beautiful blue, the white rocky shoreline, the dense green trees of the forest, and a painter-perfect sky of wispy white clouds.  Does it sound like a paradise?  It was!  Did I mention the clear calm water?  Everything was perfect.

A strange discussion about global politics sent me to contemplate the beauty of the little area where we were docked, but I did return in perfect timing to try some of Mario’s wife’s cherry cake.  And like all good things, our cruise did need to come to an end, a sleepy (ours!) ride back to Rab and to the hotel.

That evening we met and walked to dinner in the town, where we had a roast lamb “under the bell”, at a restaurant called Konoba Rab.  The sheep on Rab eat a diet of vegetation dusted with salt from the bora spray, so it’s flavor is preseasoned, you might say.  It was good!  So was the cheese made from local milk, also higher in salt than the norm, and the cured meat – a prosciutto-like cut that was exceptionally tasty. No dessert in the restaurant for us tonight: We went for an evening walk and had gelato! 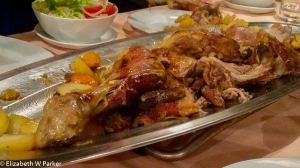 Rab lamb cooked “under the bell”

Bigger panorama looking west: Rab Town has its four towers and the dark shapes on the horizon are more islands. 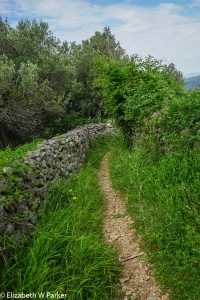 Our path, along the stone walls that mark property lines.

Monday we got up as usual and drove a short distance to begin our hike up the eastern side of our harbor.  This is the green side of the ridge that protects Rab Town and harbor from the Bora.  We wound our way along a path that was mostly covered in rocks.  The rocks are definitely “local” as you can see them all around you, but they are actually placed as a path where we can walk pretty comfortably for the most part.  We were walking through extremely rock-strewn fields, sectioned off by rock walls, some as high as 4 feet.  The walls delineate property lines, as well as keep one neighbor’s sheep off his neighbor’s plot next door.  From a distance, these rock walls can be seen to go up and over the green side, right down the white rock side, once over the ridge.  We didn’t see any sheep as we walked, but we could get a look at what they will eat when in these pastures – thick, tough thistles with wicked spines.  I was told they trample the plants to get the spines off.  Still, that sheep must have a tough mouth.

Got to love these hinges! They’re made from rubber shoe soles!

As we rose along the path, the panorama of Rab widened out beneath us.  What a lovely setting!  It was a splendid, sunny day (in fact we all got a little sun-burned), and the water glistened in the sun, boat trails were white in the gorgeous blue of the sea. The forests were lush and green, and birds soared on thermals above us.  We even saw a griffon vulture.

Talk about rocky! (PS And steep!)

On the way back down, we walked mostly along the road.  There was a brief stop for beer, coffee and pictures, then back to our starting point.  From there we took a short van ride to our lunch destination, at a place called Elizabeta (my husband actually eats at a place with the same name pretty much every day…) where we had a huge lunch on the terrace. We started with a fresh anchovy salad.  Next was a lasagna with sepia (excellent) and black risotto.  Thinking that was it, we all relaxed, but then here comes another course!  Grilled whole calamari and tuna steak.  Did I mention there was a green salad in there, too?  We also had wine…why not?  After lunch we have a long bus ride!

View looking west from the top of the barrier part of the island. Rab Town – four towers!

We left our lunch reluctantly. After all that food and wine, with a nice sunny afternoon and a view of the water at our feet, a nap right there should have been the last course on the menu.  Instead, we got up and made it to the 3 o’clock ferry – in the rain.  (So much for the nap fantasy!) As we left Rab I spotted the famous Rab sheep foraging among the rocks.

Rab sheep…can you believe there is anything to eat there?

We had the ferry pretty much to ourselves, and after the short crossing, the unloading was fast and we were on the way to Plitvice National Park.  We had to make a detour that added about 45 extra minutes to the trip, so it was a pretty long drive.  We were still full from lunch when we arrived about 6:30. Maybe it was the anticipation for what we would see in the Park (I had been reading my guidebook in the van) but by the time we cleaned up and changed for dinner, I was ready to eat something.

The lobby of the Hotel Plitvice, state-owned and run.

We stayed in one of three hotels in the national park.  Ours is the Hotel Plitvice and, our guides tell us, by far the nicest, which according to their standards and the ones we are accustomed to traveling with them, isn’t all that nice.  Actually, the hotel is not bad, and even they admitted that some improvements have been made, not the least of which is friendlier service in reception!  The hotel is very modern in its very uncluttered décor, with an appropriate ‘50s vibe.  The structure, both physically and emotionally, still radiates the Tito-era communist ethos, but you can tell it is slowly being transformed into something that any nation could be proud of.  The restaurant is very large and the food is edible, if not outstanding.  The service was commendable.  We ate dinner both nights in the hotel restaurant, so we had a good opportunity to sample the dishes.

[I am warning you now – the next day was AMAZING!]