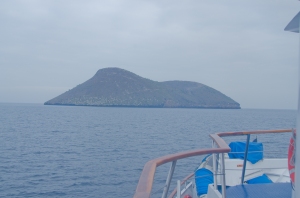 Sideways, you can see a bit more of the volcanic shape (and origin) of this little piece of rock.

This morning we cruise around Daphne Island for one last opportunity to see more of the Galapagos’ gorgeous bird-life. Keep your eyes peeled for Blue-footed and Nazca Boobies, Brown Noddies and Darwin’s finches!

Waking up early today, the sky was overcast and so no sunrise picture.  It is super humid, but we have a different format today.  Around 9:00 am on the pangas, we will circumnavigate (a big word for a small island!) Daphne Major (you have to wonder how large Daphne Minor might be if it exists). Daphne is described as a “tuff” cone.  Tuff refers to a specific type of volcanic activity, and in this case created a island of steep, sloping sides mostly made up of ash and silt from various eruptions.

The promise was lots of birds – which was true – but they were still pretty far away and certainly not the variety mentioned in the itinerary. Binoculars were a better option than cameras.

It is surprisingly hard to get a good picture of a bird with the telephoto lens fully extended in a rocking boat!  I had to up my ISO enough to stop the action.  Unfortunately, I had too many problems with my focusing, and so lost the opportunity to get many good pictures.

Today is the day that the 3-day cruisers depart and we pick up a new batch.  We anchored off Baltra and departing passengers were ferried, via panga (or Zodiak) to shore to go to the airport.

Departing passengers from the first group. The only color on a drab day!

Note the panga (zodiak). Negotiating it in bare feet and a bathing suit is nothing compared to street clothes and shoes.

Those of us continuing on had the option to go to the beach for an hour or so.  I did not take it, opting instead to stay on board and write this journal.  The weather was not sunny enough for the beach to entice me and frankly the area was just a little too port-like to promise the pristine beaches we had already come to associate with Galapagos. 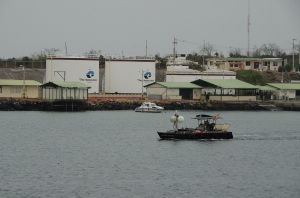 The port on Baltra Island, near the airport

The new passengers were on board by lunch and the ship cruised to our next destination while we ate and met our new partners in adventure.  Just a moment’s digression to talk about the other passengers on our ship…We (east coasters) are amazed at the minority we find ourselves in!  Unusual for me, most of the people I am meeting are from the Pacific side of the world, the Pacific coast of the US (Seattle, California) and Canada and the Pacific Rim (Australia in particular).  We have meet people from Papua New Guinea, Chile, Turkey, Great Britain, and Switzerland, too.  It is so fun to trade stories with all these new “friends” – and marvel at what fate has put us all together on this particular ship during this particular week in this particularly far flung corner of the world!  It is no exaggeration when I tell you that we parted friends at the end of the cruise – all sharing the wish that our paths may cross again someday!

Next, we head to Santa Cruz Island and visit Ballena Bay and its beautiful green beach colored by volcanic olivine crystals. 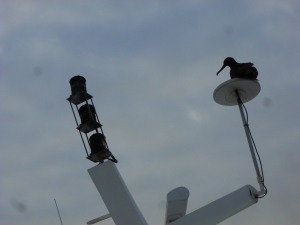 During lunch, and basically whenever we are “cruising,” the frigate birds hitch a ride.

Our afternoon excursion was characterized by the first real rainfall we have experienced.  It was not a propitious day for it, because finally we were on the hunt for the giant tortoises in the wild.  I managed to get a couple of pictures of the animals, but finally decided that a plastic bag was not sufficient to protect my camera in the rain, and so put it away.  It gave me the opportunity to focus my undivided attention on the animals we saw, and there were easily seven of them along the hike.

A giant, dome-shaped, tortoise in the wild. Taken in the rain with my camera in a plastic bag…

Forgive me too if I did not find a beautiful green beach!  I have seen olivine in the Canary Islands, and expected to find it in a similar form here.  Not the case – in fact I didn’t see it at all, though Gerry claims he was shown it by one of the guides.

Another interesting site we came across was a group of about 5 goats, all tied together by the horns and secured head down under a spreading bush.  Despite their status as an invasive species and a particularly damaging one at that, the way they were tied seemed cruel.  The story seemed to be that the goats had been rounded up by the rangers and were to be killed.  Goats arrived in these islands from whalers and pirates who left them off, thinking they could return to fresh meat.  That was true, but with no predators, the goats (like the dogs and cats and rats, too) multiplied until they were damaging the environment for the endemic species.  The tales we heard about the attempts to eradicate the introduced species were varied, some successful and other not.

Back on the beach, the weather did not promise a nice snorkel in warm tropical waters, so I forwent that, opting instead to wander around in search of birds and plants.  I was using my point and shoot camera, but got only a few unremarkable pictures.

The geology of this island (Daphne Major) was fascinating – Like the entire Galapagos!