Another view of the Billings-Rockefeller house.

A view of the Billings-Rockefeller house

The Park is interesting for the architectural history of the house and for the fame of its most recent residents, but the conservation theme that links the residents is fascinating. The house is contiguous with the Billings Farm property. One can purchase tickets to both, or the two properties separately.  In order to see the interior of the house, you must be on a guided tour. No photos inside were allowed inside.  There are also hiking and walking trails throughout the property.

We went to see the house exclusively. The beautiful house is a slice of history.  It was built in 1805, and underwent several renovations (especially under Frederick Billings’ ownership) in then current styles. The exterior basically remains in the Queen Anne style while the interior decoration is quite Victorian. It is the Victorian interior of Mary Rockefeller’s grandmother that is preserved.

The NPS website that discusses the mansion treats it as a house museum, as did the ranger who provided our tour. That three different conservationist families lived in the house is a bit of a sidebar – but an interesting one to me and for those interested in how a deforested, sheep farming state in the early 19th century was transformed back into a forested paradise by the end of the 20th.

the view from the front porch of the house – see why they built it this way?

The conservation story starts with George Perkins Marsh (1801- 1872), a remarkable man, and called the first American environmentalist. Perhaps he would be better labelled a conservationist. His seminal work on this top, called Man and Nature, published in 1864 talked of the effects of deforestation on the landscape, the quality of water, and the quality of life for all the other organisms.

Billings had read Marsh’s book Man and Nature, and set about to reforest the property and the surrounding areas, (because he immediately started buying other properties in the area). As such, the Billings property is the oldest managed forest in The United States.

I had to show you this tree! This property was deforested before the conservation efforts of F. Billings. Amazing how this tree grew – looking for the sun! 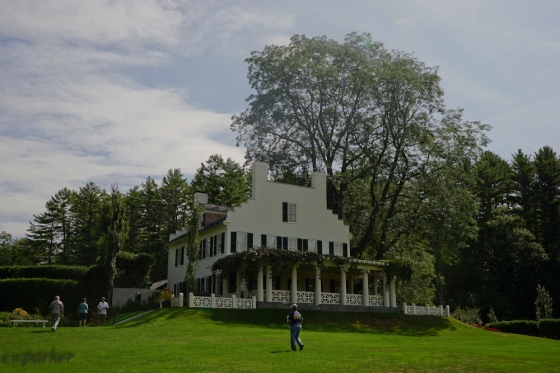 Saint-Gaudens National Historic Site, Cornish, New Hampshire
Wow. Talk about ignorant! Here I am, a self-proclaimed history buff and an art history major, and I had no idea who Augustus Saint-Gaudens was or why he was important!  Now I am better informed, but also eager to know more!

This gives you an idea of what Augustus Saint-Gaudens looked like.

Augustus Saint-Gaudens is considered to be one of the most important American sculptors.  The “American” part is due to his having grown up in the United States, where his family immigrated because of the Great Potato Famine.  His mother was Irish, his father French.  He was born in Ireland, but grew up in New York City. Most of his major works are also located in the USA.

Saint-Gaudens’ last home and studio were conserved in his memory through the savvy of his wife, who recognized her husband’s importance and who, together with their son, created a memorial trust to administer the property and the collection of Saint-Gaudens’ work.

The view of the studio from the house.

I am not going to tell you the story of Saint-Gaudens, but believe me, it sounds like it would read like a very good novel or a great movie.  The property has collected many of his works.  Some are plaster models, some are modern castings from the original plaster molds.  All of them are fascinating: Expect to be amazed at the amount of detail, the range of expression in the features and the very realistic sense of motion that encompasses every one – from the monumental to the bas reliefs.  This site is a complete package: It has a compelling hero, a wonderful body of work, and all located in an idyllic setting that looks out onto Mount Ascutney and the lush forested hills of New Hampshire.

The property is crisscrossed with hiking trails.  It also has an artist in residence, a collection of carriage’s and buggies, flower gardens and more. It is definitely worth a trip!