View from the drop off point in Luxembourg. I am sure someone told us what this is, but I have forgotten. It is one of many hilltop edifices we will see on this trip.

Crack of dawn! Yikes is it hard to get up and get going so early! We had to have our luggage in the hallway by 6:30 and ourselves fed and ready to board the bus by 7:20.

This is the old Luxembourg flag, but the one they prefer to use for international sporting competitions.

Our trip to Luxembourg took about 4 ½ hours, though 45 minutes of that was at a rest stop (for the driver!). Our weather continues to be drizzly, but the drive was quite beautiful. We found out that the bright yellow fields we could see from the air when we were landing, and now can see at eye-level are canola fields. Canola is grown both for cooking oil and for fuel.

There is a funny little set of four sculptures in front of the Luxembourg palace – this one is winking!

Once in Luxembourg we were given an hour to find ourselves some lunch. Our group opted for soup – but for some of our team, soup wasn’t enough. Then we met our leader and our guide in front of the McDonald’s (sadly, a landmark all Americans can recognize) for a guided tour of the city highlights of Luxembourg on foot. An interesting country (about half the size of Puerto Rico with 1/8 the population!) Apparently, it is a place with high wages, high cost of living, and low crime. It was very clean and orderly – lauded as a great place to live and work. It is also the only remaining grand duchy in Europe, if not the world.

The city of Luxembourg sits atop steep cliffs and spreads out at the base of those cliffs. This is looking down on the old part of the city.

I don’t really think Luxembourg is worth a visit. I found it total unmemorable.  It does have an interesting history and some very interesting customs, but I think you need to come here for a specific reason, and general curiosity might not be the right one.  However, I did really like the second stop we made in Luxembourg – at the American Cemetery.  It isn’t anywhere near as grand as the cemeteries in Normandy, but it is equally sad.

So, following the city tour, our guide took us by bus to the American Cemetery. We got a brief history of the Battle of the Bulge, and saw Patton’s grave. General Patton did not die here at the Battle of the Bulge, but so many of his men did, that his widow and the army decided to inter him here with his men. The cemetery is an emotional experience: a field of white crosses speaks to me only of the sacrifice that young men make to old men’s folly: I am not a fan of war, despite my passion for history.

The entrance gates to the cemetery.

Following the cemetery, we had a short bus ride to finally board our boat!

Just to give you an idea of how many died. And not so far away there is a graveyard for the Germans who died, too.

I found this map of the Battle of the Bulge very useful. The grey area to the west shows the “Bulge” – where the German armies made incursions into their neighboring countries, but unfortunately for them, left themselves exposed on three sides. If you can see the map clearly, it has the names of all the different divisions who fought.

Permit me a little digression: I know you are interested to hear about the boat!

I was surprised at how big it is!  We are about 200 passengers and 50 crew.  There are four types of staterooms for passengers:  We can see two suites on the very end of the boat (maybe there are more); there are rooms with balconies on one side of the boat on both the third deck and the second deck.  Facing them across the hall are rooms with sliding glass doors but no balcony,  and on the first deck there are rooms with just windows.  I have noticed that not all the boats are set up like this. (We have seen several other Viking ships along the way.) 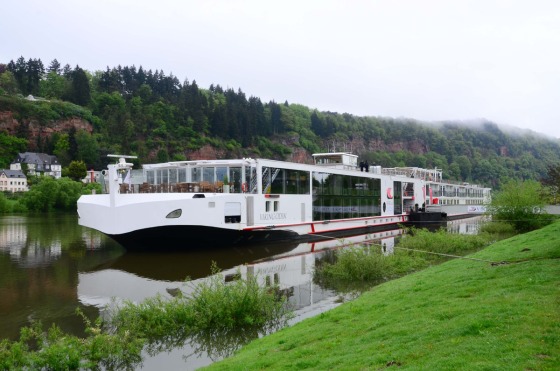 The Viking Odin, our ship

We have a room with the sliding door. It is very nice because there is a lot of light, a great view and plenty of opportunity for fresh air, as well as for taking pictures without glass between you and the scene. Actually that is a rarity on the boat.  There are plenty of scenic size viewing places but in nearly every one there is glass – reflective glass – that makes picture taking difficult from the boat.  The exception to this is the fourth deck – the sun deck – which is completely open.  However, the sun deck has not been open a great deal during our cruise – first because of rain and later because of low bridges that mean the guard rails on the sun deck are lowered to allow the boat to pass.

Which type of room to choose is perhaps a matter of budget, but if you are in a position to choose, I would suggest you consider the weather you will have (for our cruise it was pretty much too cool to sit out on a balcony) and how you like to travel.  If you like to stay to yourself and hide away in your room reading, a balcony room will give you some extra space.  Besides the additional space of the balcony, the rooms are bigger, too.  (Imagine if you had one of the suites!)  What we have found is that the action is all in the lounge and on the deck in the front of the boat, when you are on the boat at all! One of our group commented that the trip “felt like a bus trip with an occasional boat ride”!  There are way too many opportunities to get off the boat and see things, and not all of them are really worth it. On this trip they are busing us to most of the places, and we are off the boat for hours at a time. You may have to give yourself permission to skip some things, just so you can stay on the boat and enjoy cruising on the rivers.  On this trip we will have cruised the Moselle, the Rhine and the Main.  The  scenery is gorgeous! it would be a shame to not enjoy it from the boat.

And that brings me to another fact of river boat life:  If you stay in your cabin, you are only going to see one side of the river…On the Rhine, where there are castles all along both sides, you would miss a lot if you did not go to the lounge or the sun deck, from where you could see both sides. 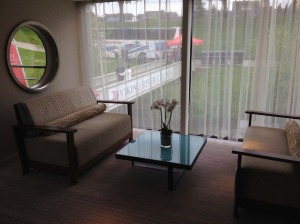 Back to our room.  It is quite comfortable, despite the cozy space.  The bed is awesome, and the bathroom a study in efficient use of space, but it has a decent sized shower and plenty of room around the toilet.

The boat is quite elegantly decorated.  I have heard varying rumors on the age of this ship, but it is not a new one. Everything is done in neutrals, with patterns and mixing of leather and wood – quite attractive.  Common spaces are at the front of the boat and include the “lounge” on the third deck where we have a bar and entertainment in the evenings, an outdoor deck space at the very front of the boat on this level where we can have informal meals for breakfast and lunch.  On the second level, which is the lobby level, the big formal dining room occupies the space in front of the lobby. And of course the sun deck up on the roof.

The corridor with rooms on both sides

The food is good (but not great).  Forget any kind of special diet, unless you’re okay with eating almost nothing. There is a plethora of sweet foods, danish pastries, donuts, brioche, etc, etc. There is always salad at the informal lunch spot,  sometimes it is vegetarian and rarely vegan. At dinner there is always a vegetarian option, but I have yet to find it the most interesting option on the menu.  Usually my reaction is more of a “Oh, here’s something a vegetarian can eat.”

The crew is exceptional!  It is very international, just as you would expect on a ocean cruise line.  Our program director is very good, funny and informative.  The dining room staff is wonderful, the housekeeping, ditto.

Everyone speaks English well, so you will not be practicing your foreign language skills unless you can find a native speaker from among the international staff. I think there might actually be a handful of Germans on the boat – at least the captain is – and he’s the only one who doesn’t speak English.

A view of the formal dining room