This is the interior of the Saint Theresa Chapel

I can’t begin to count the number of times I passed the sign for “Holy Hill” on trips back and forth from Wayland Academy when my sons studied there, and back and forth from Northern Wisconsin the multiple times every summer that we make the trek from Milwaukee to the Northwoods.  Each time I saw the sign, I was just mildly interested to know what was at the other end of the road, but never took the time to actually go and see it.

What made this time different?  Our visitor, Greg, spent his early childhood in Menomonee Falls, so we planned an outing to go find his ancestral home.  I got to thinking, planning or scheming (call it what you like) and decided that as long as we were in the general vicinity – why NOT go see Holy Hill and find out what it is all about?  And that is exactly what we did!

This is the front of the basilica.

The ancestral home was a fun excursion!  We found the house … Greg took us down memory lane talking about what he did as a boy in the area, just as Gerry took us down a tiny lane that was probably really a bike path(!) through the park behind the house. A really nice community – just as perfect for small kids today as it was in, let’s see… the 50s, Greg?

From there it was just 15 minutes or so to Holy Hill.

Like any decent religious shrine in Europe, Holy Hill was perched on the top of a hill and its spires were visible for miles around before you actually reach the property.  It is situated on a glacial ridge, towering over the neighboring farms and towns.  The ridge begins up near Appleton, I read, stretching southwesterly across the state.  near Holy Hill, the ridge is steep and heavily wooded:  The spot is beautiful.

Once we arrived in the parking lot, we parked the car amidst all the motorcycles  – this is the weekend of the 110th anniversary of Harley Davidson and this entire section of the state is awash in chrome and “rolling thunder.”  We had lots of colorful company for our visit, yet again proving that stereotypes are a waste of time!  Bikers (called “riders” here) are Catholics, too! 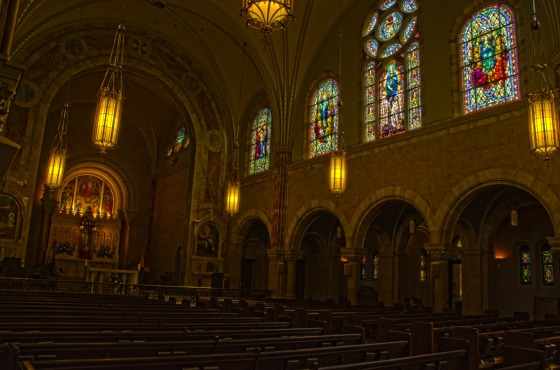 An HDR image of the interior (this color is pretty realistic).

The site of Holy Hill has been a place of worship for well over 150 years, though there is a diary reference to an altar and a cross here as early as the 1670s when the French explored the region. A chapel originally built here by European immigrants, it has changed and grown over the intervening years into a huge basilica perched atop a chapel.  The basilica is dedicated to the Virgin Mary and the chapel below to Saint Theresa. Since about 1906, the place has been maintained by Carmelite monks (shoeless).

What will you see if you go?  A structure that is entirely European in its feel  and quite surprisingly, pleasantly, out of place in rural Wisconsin.  Also be prepared for a steep climb up to the chapel and then stairs from there to the basilica.  I suspect there is an elevator, but I didn’t see it. 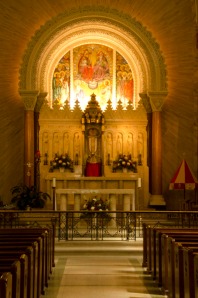 The high altar. Quite impressive.

On the chapel level, outside, but covered, there are exhibits about the history of the site and you can see the original 15 foot cross that was erected there.  There is also a explanation of the many miraculous healings that occurred to the devout who chose to travel here rather than Lourdes.  Especially walking and sight disabilities.  There is even a disclaimer – whether you believe in the power of prayer, or just attribute these miracles to power of the mind, the exhibits expressly tell you it doesn’t matter – they happened!

The basilica is really magnificent.  It appears newer than its 1926 cornerstone, but that may be because it is very well-maintained!  The interior is lovely and, as I have said already, very European in feel.  The bell tower is climbable for an unobstructed view of the surrounding countryside…Our day was quite clear, so we could see for miles.

One of the many stained glass windows.

I recommend an outing – especially if you can combine it with another location (Cedarburg is easily accessible for lunch and shopping). The shrine sees about 300,000 visitors a year, but I suspect most of those come for a mass.  We saw it with fewer than 30 other people.   Here’s a link to their website for hours and directions.