This morning we spend time in the Santa Cruz highlands. Here we visit El Chato Reserve where we hope to observe the Galapagos tortoise in its native habitat. After our visit, arrive at the airport for your flight back to mainland Ecuador.

This morning we got up early!  Our wake-up call was at 6:00 am, breakfast at 6:30 am and departure at 7:00 am.  The sea was a little rough in the harbor off Puerto Ayora, and most of us had also passed a rather rough night, with the boat rocking enough to keep everyone awake or restless.

Loading the pangas was tricky, but the ride was smooth enough.  Then we piled onto buses for our trip to the highlands of Santa Cruz to see the tortoises and the lava tube. 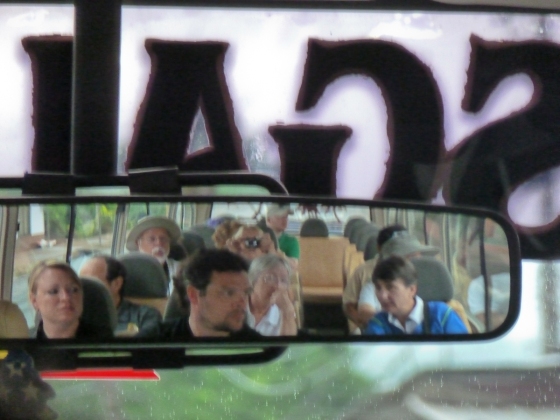 A look in the rear view mirror of our bus! (Something different…?) Can you see me taking the picture?

The drive took us through the early Palm Sunday morning streets of the town, climbing higher into the moist, rainy tropical forest and fields of the highlands.  Here the farmers adapt their methods to accommodate the tortoises, building fences of a certain height that allow them to roam at will. 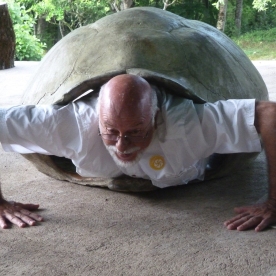 Gerry is game for climbing inside. 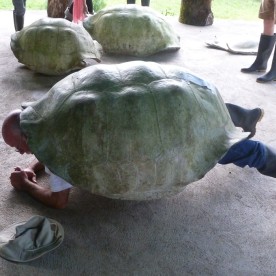 We stopped at a farm, billed as a sustainable tourism activity, where we changed into rubber boots.  There were shells for us to touch and even climb into.  The size and weight (ask Gerry) of the shells was pretty amazing seen like this- it gave us a whole new appreciation for the size of the tortoises.

Then we took off into the wet vegetation in search of the behemoths.  Another behemoth we found along the way was the beautiful, stately Cuban Cedar.

We found a nice mud hole with several beasts submerged to the edges of their top shells to protect themselves from the nighttime mosquitoes.  Naturally solitary animals, this was an interesting sight!

Giant tortoises in the mud. They love water – they just don’t swim. 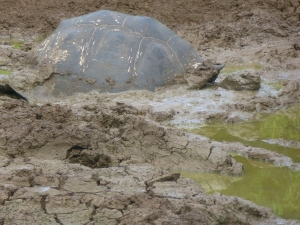 We walked among many trees and plants familiar to us from Puerto Rico, and the air was heady with the perfume of ripe guavas, many smashed by our boots and tortoise feet.

Down we go into the dank and dark!

We had the opportunity to go down and into a giant lava tube.  Thankfully the lights came on making the descent safer and the walls and ceiling of the tube easier to see.  When I reached the end, I met up with a group talking with John, our fellow passenger and geology professor, explaining about how the tube is formed and what is happening to the rocks and minerals as the tube ages. 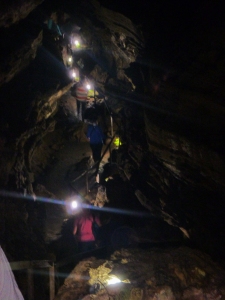 The lava tube was pretty deep, and split into a tube within a tube close to the end of where we could walk.

It seems that the tube we were in is quite ancient (though I won’t hazard an exact guess, just imagine “before recorded time” and then some!).  We were also standing at a point where we could see a tube within the tube – where one stopped but another kept on going.  It was a first for me, despite all the lava experiences I have had in the Canary Islands.

We got back on our buses, now headed for the reverse commute of a week ago:  Back to the ferry, to another bus and to the airport. Yet again, a delay for our flight, but the eventual trip was uneventful, stopping in Guayaquil where we shouted good bye to some of our fellow cruises are they stepped off the plane for destinations far flung.

In case I have forgotten to tell you, the giant Tortoise is a vegetarian!

During the morning’s activities, I happened to check my wallet to see what cash I had left and discovered that my wallet was empty of both cash and cards (credit, health insurance, and driver’s license).  Once at the airport, I found my suitcase and check in all the places I thought those items could be and not finding them, asked our ship’s hotel manager who was helping us with the airport arrangements to have our cabin back on the ship checked. Nothing. It seems I must have lost them in Quito.  I kept racking my brain for where I could have lost them or put them, but nothing seemed as likely as that they were stolen.  Still, I felt strangely calm about the whole experience.  Not completely trustworthy (except in hind-sight) but suggestive of the likelihood that the missing documents might still show up.  Fortunately, It wasn’t a substantial loss since I didn’t have much cash in my wallet, only two credit cards, a health insurance card which I already had the replacement for on my desk at home, and a driver’s license that needed to be updated at some point.  Interesting that no one who heard that I was missing these things could honestly and unequivocally entertain the thought of a theft by a crew member on the ship. 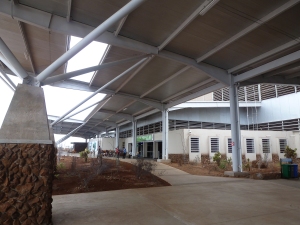 This is the airport in Galapagos, on Baltra Island, Surprisingly modern!

Once back in Quito and installed in our hotel near the airport, I did take my suitcase and backpack completely apart to look for the items, and found them!  They were in a travel wallet I wanted to use on the Saturday we were in Quito, but instead of wearing it around my neck under my clothes, I had put into the inside pocket of my jacket.  I never used my jacket again on the trip, not even taking it out of my suitcase when we were on the boat, and so didn’t realize it was still there.  The only casualty was one credit card which I called and cancelled from the airport.

Our overnight stay before the final leg of our trip home was in a cute hotel in a town called Puembo, about 15 km from the airport.  It was really nice, with a pool, juke box, pool tables, restaurant, etc., but for the life of me I can’t imagine who would stay there, except conference goers (it had a conference center), wedding guests (it could serve as a reception place for a wedding) or people like us, who needed a nice, clean, welcoming place to stay overnight for a flight.

Two creative design features that caught my attention:  In the section of the hotel where our room was located, the rooms (on two levels) were grouped around a courtyard with a fountain.  Each room section was designed to look like a separate house, with two stories.  It was a pleasing effect!  The other design element that really grabbed my attention was the cupolas in the ceilings of the restaurant.  Each was painted in the sort of Naif style expected in South America.  Again, the effect was very pleasing.

Relaxed and ready for our flight home, but still rocking with the boat!

This morning, we were awake by 5:30, in the cabs by 5:45 and at the airport by 6:00 am with the recommended three hours to spare.  All unnecessary – the airport procedures in Quito are as efficient as they are in the US, and three hours is definitely a lot of waiting around, killing time, especially at that hour of the morning. We got a chance to shop though, something we did not have time for on any of the 11 days we were in Ecuador!