“The Women who Shape the West …Change the World” 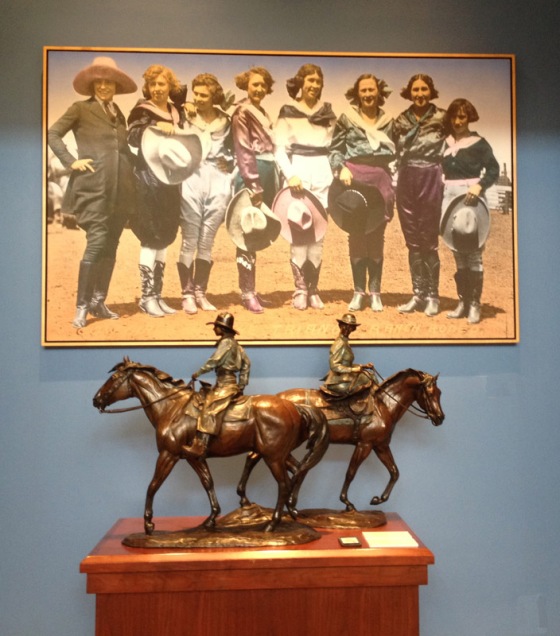 This photo pretty much summed up the experience for me (admittedly snapped with my phone clandestinely).

The National Cowgirl Museum and Hall of Fame

I have been to Fort Worth many times in the last 8 years and I have written about other museums that I visited, both in Fort Worth and in Dallas. This was one I really wanted to see, but on past trips we focused on the museums that we both (spousal unit and I) wanted to see. This time I prevailed. 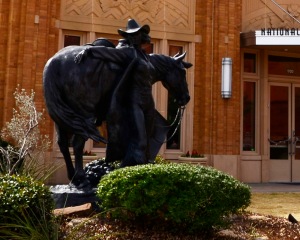 Cowgirl statue near the entrance

If you think a cowgirl museum is a women’s libber’s dream – You’re right! A whole museum celebrating women who are brave, daring, non-nonsense, “can-do” – supply your own adjectives! And the museum isn’t just about historical people, it is also a celebration of the qualities that the cowgirl embodies. It is a celebration of her independence and her spirit, her love of animals and nature, and all the rest I mentioned above.

The museum doesn’t take long to see. You can do it in less than two hours. The hall of fame recognizes not just “cowgirls” but many women who have demonstrated the qualities of the cowgirl and contributed to society as well. Many of these women were “firsts” – the first woman to do this or that; most of them did indeed ride horses. In the children’s section, there is a display of famous Texas women, all with the line “and she grew up to be” bridging a childhood of ranches and horses with national acclaim in their chosen careers. Sandra Day O’Connor is one of those posters!

There is an extremely interesting exhibit line that follows the history of the cowgirl, in reality and in her image, through film, literature, popular culture and even television. Unsurprisingly, the history starts with Annie Oakley and the other stars of the Wild West shows. These women were phenomenal horsewomen! The crowds flocked to see them and their feats of derring-do! That is up until some sexist do-gooder decided that the shows were too strenuous and too dangerous for the fairer sex. My foot! (The were dangerous for all the riders, male and female!)

Resistance was strong, and the ban on shows did nothing to “protect” the cowgirls who were off on the ranches riding every day. Soon they were back on circuit. It would be untrue to say that it wasn’t dangerous. It was. A particularly horrific accident killed one of the top riders, and after that the aura began to fade as popular culture moved on to something new.

Though the era of the cowgirl began long before I came on the scene, my childhood was full of the movies and TV of the cowgirl mystique. Think of Dale Evans, or Barbara Stanwyck. These two run the gamut from the feminine horsewoman to strong, capable ranch owner. I had a little red cowboy hat and cowboy boots, just as my brother and his friends had theirs.

The Museum also had a special exhibit open during our visit, Hanskaska:  The Shirt Wearers. Taking 12 famous Native Americans, the exhibit was of their clothing and regalia. It was really fascinating – but if you go, be sure you enter through the main entrance. We came in a side entrance – closest to the entrance to the museum and found ourselves looking at a bunch of really interesting clothing items, only at the end finding the explanation of their significance. If you start from the beginning, you will know before you look at each exhibit that the decoration on the shirt or the pants or the headdress represents an accomplishment of the wearer. Yes, some represent scalps and we all know about those. But other represent other major exploits and it is interesting to see how each tribe’s tradition marked those events. Tribes famous for bead work, covered their chiefs in bead work, those famous for quills, in quills. 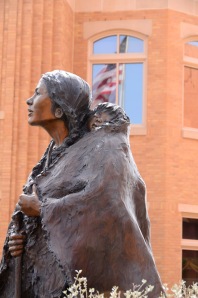 Statue near the entrance of a Native American woman with her child.

Few of the items in the exhibit are originals. The originals are very delicate. Instead, these items were recreated by a single artist, sometimes based directly on the originals and often based on photographs from the time. I would have loved to be present for the artist’s presentation on the exhibit that was happening a week after our visit.  The exhibit ends on April 27th, 2014!

My vote for this museum: Definite Thumbs Up! If you were born up through the middle of the the last century, the cultural references will ring true and bring back many memories. It is particularly intriguing to see the wider context. If you have small and young women in your group, you will be impressed by the message of female empowerment, a message not built upon the “rights” women should have but an example of what women who, not confined by their gender, just went out and did!

Here’s the website for more information and pictures of the inside (prohibited for me).

The Museum is part of a larger complex , the Fort Worth Cultural District, which also houses the Will Rogers Memorial Center, the Museum of Science and History, the Amon Carter Museum, the Kimbell Art Museum and the Modern Art Museum of Fort Worth.