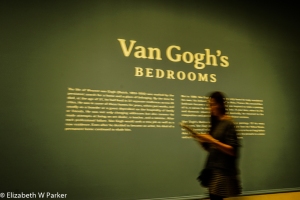 My first inkling of this exhibit was through a post on Facebook. I wondered at what I was reading … an exhibit based on three versions of Vincent Van Gogh’s famous painting of his bedroom at Arles … one of the paintings is owned by the Art Institute of Chicago, but sure the other three would be represented by proxies… That was my thinking and I left it at that.

Then I went to Chicago. You cannot miss all the publicity for the exhibit as it is on every light post and every bus stop! Surely, this is an opportunity I couldn’t miss. The Art Institute is a favorite destination in Chicago anyway.

We chose a Sunday morning, first thing, hoping to circumvent the long lines we had seen during our walk the previous afternoon. Good thinking, perhaps, but it didn’t mesh with reality! The lines were fairly long when we got into them at 10:10 (the Museum does not open until 10:30 am). We were in the not members, no advance ticket line. That’s my way of telling you that if you are a member or if you buy your tickets online in advance you will not have to wait in a long line to buy a ticket and enter the museum. (Honestly, though, the efficiency of the Museum’s set up for handling the crushing flow of visitors is noteworthy.)

We traversed the museum quickly and directly to the exhibit gallery, pausing only to purchase the audio guide (extra charge) and still found ourselves overwhelmed by the crowd. I hope you will go and I hope you will go on a day that is not so crowded! There is a lot to see and digest, and the experience is quite degraded by having to stand in another line to see the timeline (while being exhorted to read faster and move along by the guard who was only hoping to keep the wait shorter for those to come), by having to stand on your tip toes to see over the heads of those in front of you, and by having to elbow your way around people who were chatting about other things or just not paying attention! This is where the audio guide was particularly helpful: As long as you could see the number, you could listen to the commentary and not need to get close enough to read it. Many of the paintings are best viewed from a step or two back, and it was also easier to see the paintings to either side that might be referenced in the commentary.

Logistics aside, this is a wonderful exhibit. The overlying premise is Van Gogh’s search for a place to call home. The context here is not a dwelling place, but a spiritual as well as physical home. Organized around all the places he lived during his abbreviated life, you trace his development as an artist and a person, based on the way he depicted the places he lived. The culmination, you can guess, is the bedroom he had in “the Yellow House” in Arles.

The three originals paintings of the room are all gathered here in the Art Institute. They do hang together, almost side by side. But the really extraordinary comparison of the three is done via a computerized video of the details from each. The video is fascinating to watch. Divided in three, you see the details side by side and enlarged. If you have followed the commentary (audio or visual) as you covered the exhibit to here – you can mentally point to the differences you know are there and think about the reasons you have heard for why Van Gogh changed the details and colors. It is totally absorbing and a highly innovative way to really look at the works.

The exhibit is very shy on the more sensational details of the painter’s life. It is both something I noticed and something for which I was also glad. (Having been an art history major, I knew what was going unsaid, but at the same time I was glad that it was not distracting from the thesis of the curators.) You do finish the exhibit with a sense of loss and sadness, both for the artist whose life was not easy, but also for yourself and the world of today: That we were robbed of further work by this amazing talent.

Another interesting sideline within the exhibit, is a video by the conservators detailing the science behind the conservation of the paintings. (The first was damaged by a flood during Van Gogh’s lifetime and that was what prompted him to make the second version.) The conservators discovered the real colors Van Gogh used!

Just as my own aside, I am reading “Keeping an Eye Open: Essays on Art” by Julian Barnes. His “Part B” of the chapter on Manet deals with a similar subject: An exhibition exploring Manet’s three versions of “The Execution of Maximilian.” (And no, I am not such a nerd that I read essays on art for fun! I am reading the Barnes’ for my book club…However, I am enjoying it very much!)

I hope you will get to see this exhibit. Make plans around it if you need to, because it is really worth it. Of course, The Art Institute is a magnificent museum in its own right, too, and any visit you make will reward you with something new.

There are lots of wonderful paintings to enjoy, beyond the “bedrooms.”