This morning when I woke I heard an ominous rumbling that I assumed was the sliding doors of the room upstairs.  Nope.  It was thunder!  It won’t strike you as strange, but here in Lanzarote it almost never rains.  Can you believe that it has rained every day we’ve been here?  Today, however, was a big downpour.

Our plan for today was to hang out in the hotel in the morning so I could finish updating the blog (still back on the London posts!).  We were working in the “Level” lounge, a special place for us special people in the hotel.  The courtyard of the hotel is completely open to the sky so we watched the deluge as we worked.

Deluge is not too strong a word for that rain storm.  The streets were flooded, and when we arrived at la Famara Beach (one of today’s planned stops) there were rivers of sand running down the beach into the surf.  The water was totally discolored. Part of the road was shut down because of sand and water on the roadway.

Famara Beach, one of the two prettiest beaches on the island.

The beach was very petty.  It was a big, wide, long beach, with areas of sand and areas where rounded black stones (like our river stones) practically paved the beach.  The surface of those stones was so smooth – it rivaled the road (which was actually pretty bumpy). We walked down the beach.  Ahead of us huge cliffs rose almost directly from the water.  (We were on the Atlantic side of the island today – last evening too.)  There was a small urbanization behind the beach at the foot of these cliffs and I decided that were I to buy a house here, I would live there – close to the ocean and far away from everywhere else!

The beach reminded me a lot of Costa Rica.  Plenty of small, but surfable waves pounding the shore.  There were plenty of surfers around too – and surfing school classes – just like in Costa Rica. 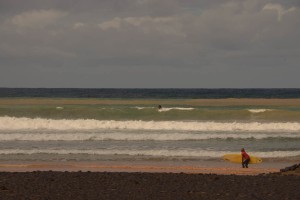 Surfers at Famara – reminded me of Costa Rica

From Famara (also the name of a good wine we tried a few nights ago) we drove in a circle back to near Tiagua to see the agriculture museum.  I was hoping for a good explanation of the history of farming here on the island, but this museum was an old farm with exhibits about its own history.  It was a very quaint and picturesque place, but it didn’t add much to our knowledge of Canarian farming. 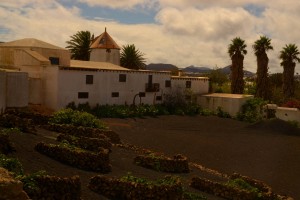 Back on the road (we planned this road trip around the rain) we continued on our big loop now headed for Teguise.  We were hungry and decided to stop for a quick bite.  What a nice town!  Lots of little shops and neat little places to eat.  We wanted something simple – like a sandwich – so stopped at a place called Bar Las Cejas.  We eschewed the little plastic chairs and tables outside, and stepped inside and back in time to a more elegant century.  A familiar checkerboard floor of white and black marble, wooden tables with marble tops – it was perfect!  And 3 euros for a great big sandwich…what wasn’t to like?  After our lunch (mind you it is already 5 in the afternoon) we continued our trek toward El Mirador del Rio, another tourist site designed by Manrique.

Inside the restaurant/bar in Teguise, a very quaint town!

We arrived just 3 minutes too late!  It was closed.  So we saved ourselves the 9 euro entrance  fees, but really didn’t miss a thing.  Next to the Mirador there is a road that stretches along the cliffs, and by walking along that road, we had exactly the same view we would have had from inside:  A view of the island of La Graciosa and the salt flats at the base of the cliffs on our side.

It was a wonderful view – definitely worth the drive up there!  The sky was pretty stormy still, with the mountaintops behind us obscured by the clouds, but out at sea, the sun was breaking through the cloud cover creating the most mysterious light on the ocean.  Sunbeams through the clouds always make me think of the pictures of God that I saw as a child.  We braved the cold (yes, cold!) wind for as long as we could and then headed back to the hotel.

This end of the island is very different from the other areas we have seen.  It is green, for one, and has trees, for two!  Lots of trees!  Tall palms as well as evergreens, plus lots of scrub brush on the ground.  The color scheme is totally different:  The ground is red.

The view from the Mirador del Rio – the island of La Graciosa.

Actually, thanks to the rain of the last two days, the entire color scheme of the island is in flux.  The reds and yellows and greens that blend in with the brown and black when the land is dry, now stand out.  I hope you’ll be able to see it in the pictures.

Tonight for dinner we’ve opened one of the bottles of wine we bought yesterday at the Stratus Winery; we have local cheese, local bread, salad and lomo iberico.  We are listening to a CD of Canarian music – the perfect evening (Well, almost. It would be 100% perfect if we could sit out on our porch, but it is too cold and rainy!).