That’s what it’s all about!

Summerfest is a huge music festival (the world’s largest according to the Guinness Book of World Records 1999) that takes place every summer (always late June through the 4th of July) in Milwaukee.

Un-photo-shopped proof that we were there!

The Summerfest grounds (a permanent landmark) are just a short walk from our condo downtown, and all through the summer there are festivals there –  Pride Fest, Irish Fest, Italian Fest, African Fest – a “fest” for every ethnic group in the city. All promise fun and draw tons of visitors.  Most are just Friday to Sunday affairs, but Summerfest, the “Big Gig” as it is nicknamed, lasts usually about 11 days.

During Summerfest, the music starts at noon and changes about every two hours throughout the day, finishing up around midnight.  To gauge the effect, you must imagine the active 11 stages.  Incredibly there isn’t much noise pollution from one stage to another.

In addition to all the outdoor stages and free venues, there is the Marcus Amphitheater where the really big names play in concerts for which you have to purchase special tickets. All the concerts we wanted to see (Tom Petty, Rush and the Eagles) were sold out by the time we got organized to get tickets. Still, the main action is going on outside the amphitheater so by no means is a trip to Summerfest all about the big names. 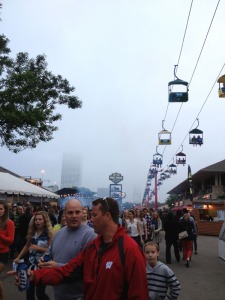 One of the rides and an idea of the fog.

We went on the evening of July 3rd.  We paid a $15 entrance fee, buying our tickets from a properly uniformed Summerfest employee well before we got to the gates. It was a holiday eve, so there were big crowds, and the crowd got bigger and bigger as the night wore on.  The crowds were unfazed by the weather.  Not summery at all, it was cool and foggy!  In fact the fog completely obscured the fireworks!  Almost everyone commented that it was a huge waste of money to be shooting them off when no one could see them.  It was a bit eerie actually.  Imagine the scene of the writing of “The Star Spangled Banner”:  Flashes of colored light and huge booms over the harbor (“the bombs bursting in air”).

There is plenty of food at Summerfest – mostly supplied by restaurants whose names we recognized, and sort of like a food court or a food truck party, there is plenty to choose from and not everyone needs to eat the same thing.  There was also a disconcerting number of commercial venues – shops and such.  Selling tour shirts for the bands is one thing, but just random shopping seemed out of place.  There are also rides and games, a bit like a circus side show. 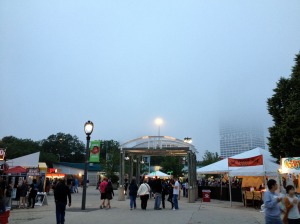 You can barely make out the buildings in the fog.

Summerfest, especially up to and including the fireworks (about 10pm) is a family-friendly event and you see lots and lots of pre-teens there with their parents and siblings.  You also see an incredible cross section of people (hippies, goths, farmers, preppies, old, young, a little of everything and all the variations in between.) The people watching alone is worth the $15.

We wandered from stage to stage stopping to listen to the various bands.  Not a single name did we recognize!  I was amazed that there were people actually singing the words to songs I had never heard, nor heard of!  It culminated in our sitting in the BMO Harris Pavilion (there was obviously something going on there) and waiting for a show.  I looked up the schedule for that stage on my phone but didn’t find anything listed, yet clearly there was to be a big name band there because there were paid-for seats in the front (full) and free admission seats in the back (almost full). 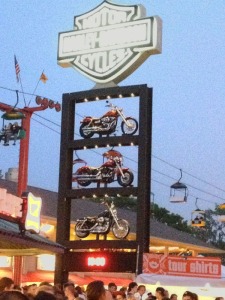 The “billboard” for the Harley Davidson Roadhouse.

An all-girl band came on stage:  A drummer, 3 guitarists and a singer.  Not bad at all. By far the most professional of all the shows we had seen…but we still didn’t know who they were (and of course, how embarrassing!  We weren’t going to ask!)  Later, we googled the lead singer and found out we had been listening to the Go-Go’s.  (Still doesn’t mean a thing to me!) 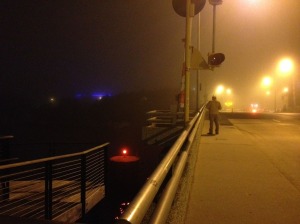 Walking home in the fog, a quiet end to a loud evening.

Summerfest is about music, and, of course, this is Wisconsin: Beer!  (Miller Brewing is a BIG sponsor.) My memory of my last trip to Summerfest was visions of drunken young people spilling beer on one another.  It was not so bad this time but we also left at about 11:00 pm so maybe it got worse later.  I also think we were spared some of that silliness because the Go-Go’s are a band from the 80s so the crowd was a little more mature. That was our last stop before heading home in the fog.

In addition to photos, here’s a little 2 minute video I made of the various acts we saw. (I apologize for the quality as they were all, stills and video,  taken with an iphone). Enjoy!