Learning about the Civil Rights Movement 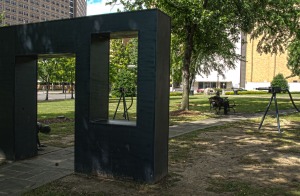 This sculpture depicts the use of fire hoses against the demonstrators.

The second day of our trip was dubbed “Civil Rights Day”, and our first stop was in Montgomery, AL.  (You can read about that stop by clicking here.) We were fortunate in Birmingham that the Civil Rights Institute was open from 1-5pm on Sundays, so that was our focus for the afternoon.  Unfortunately, the Institute does not allow any photography inside so most of the images on this page are from the Kelly Ingram park in front of the Institute (and kitty corner from the 16th St. Baptist Church).

This sculpture shows children behind jail bars – the children who participated in the demonstration were jailed, and house right beside prostitutes, murderers and thieves.

The Civil Rights Institute is extremely well done.   I read that some of the docents were actually participants in many of the events recorded in the museum, and that lends an interesting poignancy to the exhibits.  Beginning with an 8-minute documentary, there is just one way through the museum, but the arrangement of the spaces keeps you walking around, discovering, gently moving you through the timeline of the events, especially in Alabama, that defined the Civil Rights Movement.  As you wander, life size casts of people enliven the exhibits.  Looking at pictures online of these figures I wondered at the irony of casting black people in white plaster (and maybe there is some symbolism in that) but the casts are actually an indeterminate shade somewhere between black and white, and black figures as well as white figures are all cast in the same material and the same color.  That symbolism would also be highly appropriate.

Grounding the exhibits are timelines for each of the major years of the movement:  US and world events on top; Alabama events on the bottom.  Expect lots of newspaper articles, photographs, dioramas, recordings, and videos.  Everything is very well done.

The police also used dogs against the demonstators. Keep in mind that MLK was leading the demonstrators and that they were peaceful – passive resistance – making the use of force by the police extreme.

The museum is sobering, very much like the Peace Museum in Caan, France.  It is hard to read and face the horrific events, man’s truly inhuman treatment of other human beings, and not be forced into reflection.  I mentioned that I was just a little girl at the beginning of the movement in the early 60s, but I was a teen by the end, and much about the busing and desegregation of the schools I remember.  But, it was just “the news”.  It had nothing to do with me directly p in the enlightened north and in boarding school at that!

I was particularly struck by how resistant the segregationists in Alabama were to accepting the changes that were being legislated both in Montgomery and in Washington, DC.  It was almost perverse.  From this museum, however, I could not know if this was a pervasive perversity – or something unique to Alabama.  I suspect it was the former. 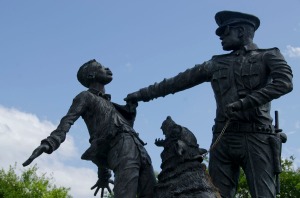 This sculpture recreates a news photograph of the same scene – where the policeman allows the dog to attack a man.

If I found the museum sobering, my 23 year-old found it to be a huge guilt trip laid on whites (which I guess means he understood the role whites played in these events and knew that they were shameful).  He has never lived in a time where discrimination like this has been rampant, and growing up in Puerto Rico, his experience is of a integrated society where people come in all shades of brown, black and white without distinctions for economic levels or other external measure.  This suggests that we need a way to reach this generation with a message that we cannot allow this behavior to exist ever again against any group (women and Native Americans come to mind even in the 21st century).  I have seen the same reaction among people who grew up after World War II and believe that the Holocaust has nothing to do with them “because they weren’t alive” when it happened, so they reject any “blame.”  Perhaps, we need to re-message this type of museum – away from guilt and towards prevention?

From the museum, we crossed the street to Kelly Ingram Park, where there are a series of sculptures that interpret the events depicted and described inside the museum.  Looming from the corner is the 16th Street Baptist church, the scene of a bombing that killed four young, black teen girls.

I hope you enjoy these two posts on the Civil Rights sites in Birmingham and Montgomery, and I hope you will comment.  I am particularly curious to hear your own memories of this period of our history.

Click here to continue reading the blog of this road trip.  Next stop: Memphis!