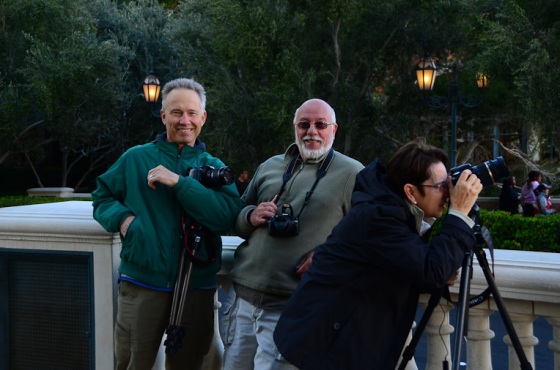 David, Gerry and Annie, shooting at the Bellaggio

I am currently in Las Vegas, but I’ll back up a minute to explain how I got here.  Sunday morning was beautiful, if crisp.  We got up early and had to say our goodbyes. By 9:15 we were on the road to the airport, not knowing if we were in for a 40 minute drive or an hour and 40 minute drive.  Thankfully it proved to be the former!

Once in the airport we went through what had to be the most disorganized and inefficient security procedure I have experienced, but eventually we did get through it.  Gerry, who always seems to have to go through extra screening, got held up this time, too.  I guess he looks like a terrorist (but of course it could be the inappropriate remarks he makes that get him into trouble…)

The flight from LA to Vegas was just under an hour.  Between the clouds, I could look down on the mountains – some of which didn’t seem all that far down.  The pilot had us flying at a mere 27K feet, so the closeness was probably due to that as well as the height of the mountains we were flying over.  As we got closer to Vegas the cloud cover increased but still we could capture interesting glimmers of the ground below – Lake Mead and what I now suspect is the Valley of Fire, neat sub-divisions carved out of the desert and finally the “Strip”, though of that all we could see was tall buildings.

Once on the ground, while we waited for Annie and David’s plane to arrive, we went to Hertz and picked up the rental car.  What a funny car!  A Jeep, but something between an army jeep and a luxury car – funny boxy shape that is hard to get in and out of, leather seats (the back seat bench is so narrow it feels like a Japanese car) and roll-down windows (the old crank type).  Weird little vehicle, but it gets us around with all our stuff.

Seeing Annie and David again was great!  Wonderful reunion and we pick up right where we left off last September in Napa.  We settled into our hotel (dropped off the stuff) and then went to the Hard Rock Café (which is right across the street) for a late lunch, followed by a driving tour of the strip.

Disney-ish!  That is the best description.  Everything is so over the top it is really funny.  There are a lot of people here – and it is cold, but many are walking around in T-shirts, tank tops, shorts and flip-flops and it is barely in the 50s.  We’re bundled up and still complaining.

A short nap and it is time to head to the strip with our cameras and tripods.  The hotel has a shuttle that dropped us off at the Bellaggio.  That put us right across the Bellaggio’s “lake” from the Eiffel Tower.  After shooting for a while we were so cold we went indoors, but I found the hotel lobby way to populated for me, and Annie and I wanted to be outside to take pictures, so we went out again.  This time we slowly wended our way around the lake to the street side, and were rewarded with a fountain show in the lake. The show is done to music which is piped out to the world in speakers located in the cement balustrade around the lake.  Apparently it happens every 20 minutes or maybe on the hour…I heard both.  We caught just the tail end of one around 10 o’clock that was set to much more bombastic music than we heard in the early evening so it was accompanied by far showier fountain antics as well.

As it was getting dark, the shooting was getting better, especially for the lights of the hotels and casinos.  What a landscape of color, twinkling and flashing.  Taking pictures was fun, despite the cold.  My fingers were so cold I could hardly manipulate my tripod.  The tripod was very handy though – I was doing 5-15 second exposures working with the lights from the displays and the cars. A cute young man, some sort of security guard on a bicycle, shooed us away apologizing for the hotel’s policy of no tripods.

By now at Caesar’s Palace, Annie and I finally went inside and sat at the bar, David and Gerry having preceded us by probably a half an hour (at least my beer was already warm so it had been awhile).  It felt good to be inside, but looking at the girls in strapless mini, mini-skirt dresses was enough to make us still feel cold (as well as exercise our eyebrows up and down).

The Strip in action

After we were warm, we went out again, this time wandering back over toward the Paris Hotel (Eiffel Tower, get it?) Along the way, we stopped to photograph a particularly colorful corner, graced by a shapely, feminine bum on a billboard.  Guess what the men were concentrating on. After quite a bit of that we were all finally ready to settle down and have a bite to eat.  To find a place we went into the Paris casino…and finally found a place called the Ile St Louis Café.  Under the blue sky of (the) Paris (Hotel Casino ceiling), we dined al fresco, complete with surly, French waiter.  (At least he had an accent that complimented the attitude.)

Filled with hot soup and a little wine, we located our shuttle driver and made it back to the hotel at a reasonable hour for people of our age!