If I had to pick a place in Puerto Rico that was as unlike San Juan as possible – I would pick Rincon.

Rincon means “corner” and this little corner of Puerto Rico is famous for its surfers, scuba diving, laid-back ambience and plethora of English speakers, tourists and residents alike.

Lucky me! Some friends asked me to  spend  a “girls’ weekend” with them in Rincon.

Our adventure began on Friday afternoon.  We headed out of San Juan about 2:00pm.  Leaving San Juan is a balm for the soul in itself but no less because once you are out and away from all the concrete, you rediscover that Puerto Rico is actually a green, tropical island!  I know that sounds funny – “Of course Puerto Rico is a green, tropical island!” you will say.  But living in San Juan it is really easy to forget that! 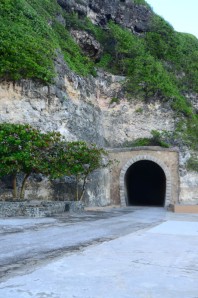 The expressway to the west of the island skirts the northern coast  of Puerto Rico, past Dorado and Manati, Arecibo and Hatillo.  On the southern side of the expressway you see the dramatic Karst topography – steep, abrupt hillocks covered with vegetation interspersed with steep, abrupt canyons and sinkholes.  This is the area where the Rio Camuy Caves and the Arecibo Observatory are – both use the topography to distinct advantages.

… and out the other side.

Near Hatillo you leave the expressway in what has to be one of the most spectacular views of the ocean – especially from a road!  The road descends strongly from a curve at the top of a mountain, and as you get to the curve the sweep of the Atlantic  opens before you.  You can see way down the coast to the west, where breakers are pounding the coastline.  It is unforgettable! 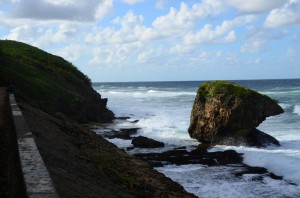 The train’s path goes off on the left side of the photo.

Once off the expressway, the road, though still good, now becomes a long series stretches between stoplights.  We decided to get off near Guajataca (pronounced “goo-ah ha TAH cah) to visit an old railroad tunnel.  Apparently once upon a time, there was a railroad that went around Puerto Rico.  Though the tracks are gone, you can still discern the path the train took through the tunnel and along the coast to the west.

It was also the perfect place to stop and stretch our legs a bit.  I made a mental note to return and hike the full distance of the path beyond the tunnel.

We arrived in Rincon about 5 and settled into our loaned apartment.  First order of business:  Enjoy the famed Rincon sunset.  And enjoy it we did!  We had ringside seats:  The third floor balcony of a condo right on the beach.  The sunset lived up to its fame.  We oohed and aahed over our cocktails.

Next we headed out for dinner.  We knew where we wanted to go – but conveniently we had no map or GPS, so we went around in circles a bit and generally got the nickel tour!  There really isn’t much to downtown Rincon, but this still being the Christmas season in Puerto Rico, we did get to see the town square filled with Christmas lights.

By hook and by crook, and a series of concentric circles we found the restaurant (Shipwrecked) and enjoyed fish tacos for dinner.  It is a very informal place with very delicious food. So good, we would return on Saturday night too!  Returning to our condo, we were up talking until the wee hours (I think we made it to 10) as women are wont to do when together. 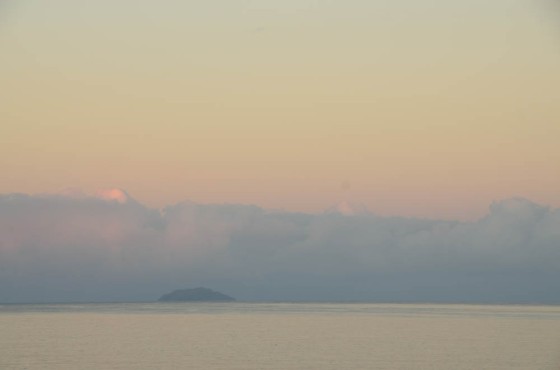 The next morning I woke up in time to see the pink of the dawn fade slowly from the sky.  It was lovely!

We took a long walk on the beach in front of our condominium.  The houses here are pretty close to the beach (you probably wouldn’t be able to build so close now), and many showed some serious damage, that we were told was, from Hurricane Sandy.  Mostly we saw where waves had washed away the ground beneath the foundations  causing the porches to collapse, but one house had the whole kitchen wing detached and askew in the sand.

The scene along the walk  was a quintessentially, prefect beach scene:  Brilliant blue sky, golden sand, gentle waves breaking , swaying palms, pelicans, people sunbathing and swimming.  This is the reason people love Rincon – It did not disappoint. 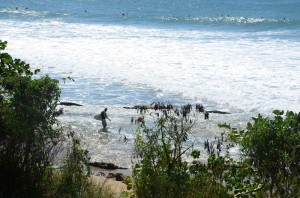 As I mentioned, Rincon is famous for surfing.  The beaches we visited on Sunday were crowded with surfers.  Rocks and reefs, visible between the waves, create a certain tension in the watchers…you can guess why!  We headed out to the lighthouse to see if we could glimpse a whale or two (no luck).

Since my last visit a park has been built around the lighthouse, which makes it very easy and pleasant to stroll along the top of the cliffs, enjoying the waves and the view of the Mona Passage below.

From the lighthouse in Rincon, we drove up the coast to Crashboat Beach.  I had a different memory of it, which I realized had to be of an entirely different beach.  The day was gorgeous so It was packed, and parking  was a challenge to accomplish legally.  The beach has two parts, separated by what looks to be the remains of an extensive cement dock. 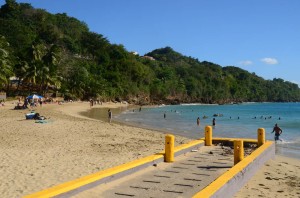 On one side is a gentle crescent with breaking waves for body surfers.  On the other is a flat, straight beach, great for families with small children.  It is beyond this second portion that you will find the typical, colorful yolas (wooden fishing boats) for which Crashboat is known.

As we explored the beach, we discovered the local “Pied Piper”!  At least the birds were willing to pose! 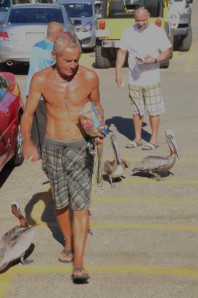 The Pied Piper of Crashboat

The Pied Piper of Crashboat Beach