Sometimes an intrepid blogger must go above and beyond to provide her faithful readers with the benefits of her experience. Though it was not my intention, it was the result when I tried to review the show currently at the Milwaukee Art Museum through September 20th. Now, after two visits, I can finally write a review of the show “Van Gogh to Pollock: Modern Rebels.”

I first visited the show on the first Thursday of August. I could not forget that: I discovered that day that the Milwaukee Art Museum is free the first Thursday of each month. The long lines were the first hint that something special was going on. As a member of the Museum, I and my guests always get in for free, but the significant change in the number of visitors was impossible to ignore. It is wonderful how many people took advantage and how many children were in the exhibit, too. (Save that fact. The Museum is free the first Thursday of every month.)
I do not usually get an audio guide for an art exhibit, because I prefer to read the captions accompanying the works. Despite the crowd, it was still possible to do that, so I set about looking at the exhibit in my usual way.
By the third room, it struck me was that there was just one work by each artist. (Two artists have two). That most were significant works by that artist was helpful. Certainly you see some very prominent artists represented by prominent works. But immediately thereafter, I was perplexed. What is this show all about?

In fact, I was left with the indelible impression that this show has no thematic reason for having been put together, despite the name.
The show is built on the collection of the Albright-Knox Art Gallery in Buffalo, NY. Unfortunately, that in itself is not a reason for a show. There is no narrative that links the work either through time, style, geography, color, or subject. It is simply a collection of works, mostly paintings, acquired by the Gallery. Why did the Gallery acquire these works? We aren’t told that. How did the Gallery acquire them. We aren’t told that either. In fact, I could not find a single reason for the content of this show.
After that first visit, I couldn’t write a post about it because I felt I must have missed something. Missing something as important as the unifying reason for the exhibit is a glaring error I wasn’t prepared to reveal! So, I went a second time (still free for me since I am a member) and this time I rented the audio guide to see if it would explain what I missed the first time around. 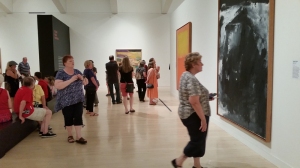 Listening to the audio guide reminded me of the reasons I never rent them. It was too slow. It ignored works I wanted to know more about. It told me next to nothing about the show (and the little it told me was either art historian gobbledygook or anecdotes of little worth).
According the MAM curator the show was about the “rebels” of the 20th century. That theme was not developed, either by the audio guide or the labels, so I remained unconvinced. In fact, I am still convinced that this show does not have a theme. I go to museum shows on purpose to learn something, and I feel cheated when I go home, having seen a lot of “pretty” pictures, but having learned nothing. I would like to challenge the curators of the MAM to work harder at organizing shows that teach or instruct. Especially since the main collection of the MAM is closed until the fall for renovations to the building, to stay relevant and keep people interested, you have to offer something meaningful. Certainly “modern rebels” would be a good theme: But it has to be developed, and it was not.

With all that said, should you go see this exhibit? Maybe. If you know nothing or very little about, or need a refresher course in 20th century art, you should visit it. Here is an Art 100 survey of the major artists of the period. You’ll get a chance to see names, many of which you will recognize even if you think you know nothing about art (they are that important) and you will see a representative work by each. You may be able to discern an attempted continuity if you read the captions, though the organization is not strictly along a timeline. You may also learn where the different movements developed and sometimes even why.
This is also an excellent exhibit to take children to see. Taking children to art museums requires a bit of creativity – so play a game like 20 questions. Or “Who can guess my favorite painting in this room and tell me why I like it?” The winner gets to pick a favorite in the next room. The goal has to be to get the child to look at the works – not to learn the name or the style – just to look and see what he or she can see.
Beyond, this? Maybe it’s a hot day and you need sometime in the AC? Or maybe this is all you can really take of an art museum visit (I do know someone who walked right through the whole thing and only looked at one painting…).
But, if you’re looking for a learning experience, wait for the next show and hope for better curation.